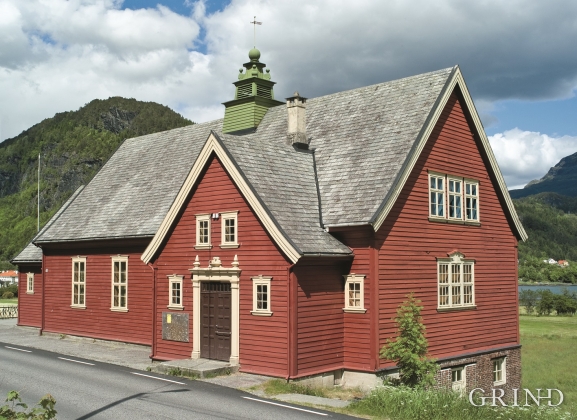 Close to the main road at Bru lies a large well-proportioned building with classical features; of size most like a church, with church vestibule and a tower, but without a steeple. This is Haugatun, Strandebarm Youth Association’s hall; designed by architect Torgeir Alvsaker in 1927 and completed in 1929.

The interim war period was a dynamic period for the youth movement, and many youth associations built their own large and splendid halls in this period. In Hardanger alone in the period of 1925-40, 8 youth halls were built, designed by Torgeir Alvsaker. A common trait for them all is a long and tall shape, steep roof, covered in slate, with an arched saddle and a small tower, entrance at the gable below a lower roof and a short, tall cross-building at the other end, a “basilica”-model.

Alvsaker’s youth halls can be characterised as neo-classical with national overtones; a definite expression for the youth movement in its national ideology. Johan Lindstrøm and Magnus Dagestad in Voss also designed several neo-classical youth halls, which became models for youth halls designed by master builders in other places.

As an outstanding example of neo-classical architecture, Haugatun is protected.