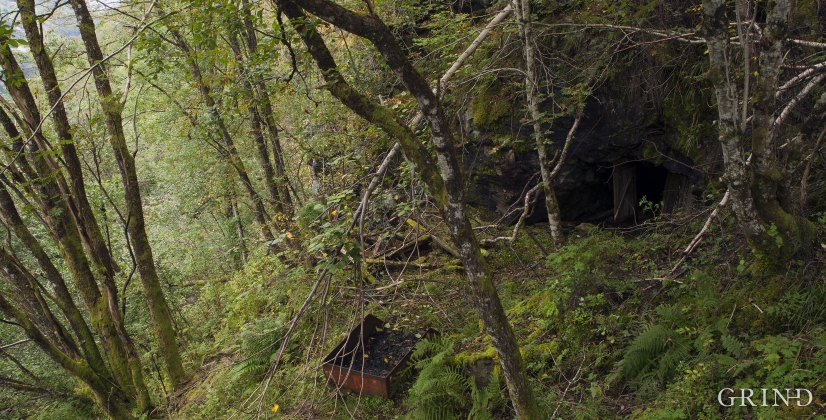 Mining pit in the steep slope at Froastad. (Svein Nord)

RAW MATERIALS FOR MUSIC - AND FOR MOSQUITOS

South of Gravdal there is a special rock type, which among other things contains small fibres of the mineral amphibole (tremolite). Roughly 4000 tonnes of this rock was quarried, crushed and used to make gramophone records during World War II. Today, only the hole is left from the quarrying, which ended in the 1970s. And perhaps some old gramophone records?

A similar rock type was also found at Froastad in Fyksesund. From early in the 1900s serpentine and talc were taken out from here. The raw materials were used for many things, from soap to road surfaces, and after the war, also for sand for roofpaper by the Finns in connection with the war injury settlement with the Russians. Another somewhat unusual use of the talc took place in the beginning of the 1950s. Clumps of DDT were imported and split by axe. In the mill by the fjord, in Høyvika, DDT was split off and ground together with talc and sawdust, and thereafter exported to Turkey. They used the mixture as a mosquito repellent. Only one shipload was sent, but the smell of DDT endures long after the mill and quarries were finished in 1968.