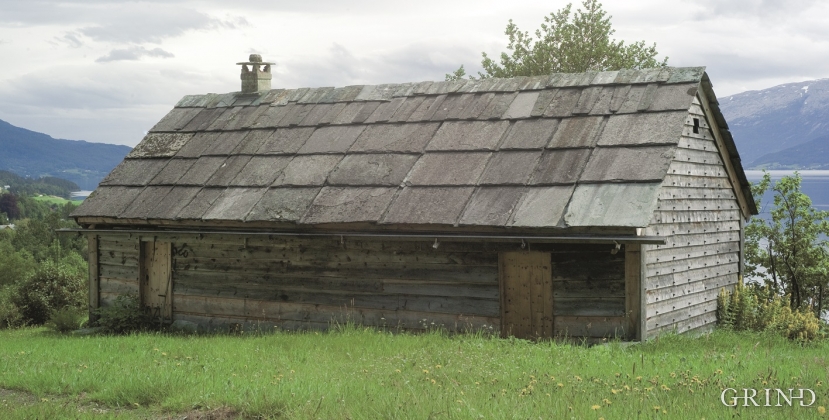 The old smokehouse still left in the farmyard at Vikjo a little south of Omastrand, was protected in 1924. The smokehouse is from the 1500's.

Originally the protection also included a two-storied bed-loft with covered side passageways and a store on stilts. These buildings were taken over by the Youth Association in Strandebarm, “Kirkebygdens ungdom” (the youth of the church community), and became the core of a small rural museum at Bru. For many years the loft stood on a new site close to the school, but in late autumn 1969 it was pulled down and moved to Horda museum at Stend, where it is still in store.

The smokehouse in Vika stands in its old place in the farmyard at Omastrand, joined to a frame-built rough kitchen in the south gable and a small chamber with passageway, or “door” in the north gable. The building is covered on the outside with horizontal, boards cut to the edge, fastened with wooden rivets. On the covering boards and on the door of the kitchen we find carved pictures of sloops and other boats. Like the horse in the inland communities, the boat was central in the fjord communities for all transport and communication.