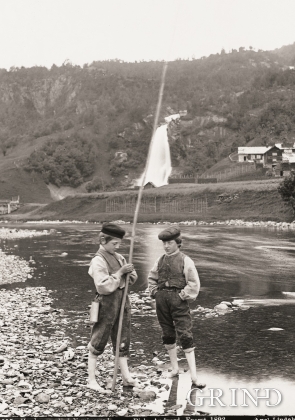 Boys fishing from the river at Steinsdalsfossen, 1880-1890. (Axel Lindahl)

Øvsthusfossen, or Steinsdalsfossen waterfall, as it is called today, attracts tourists by the thousands, and always has done as long as there have been tourists in Norway, since the early 1800s.

A waterfall one can walk under with dry feet is rare, even for northerners who are used to waterfalls. This waterfall is a relatively recent phenomenon. Previously, until the end of the 1600s, the water flowed west of the current waterfall, nearer Ullsnosberget. In 1699 "Øvsthus farm suffered great damage when the river flooded its banks", it says in the genealogy history book for Kvam. The old river channel was closed off, perhaps as a result of great amounts of snow or an avalanche, and the water ran instead off the cliff.

Why is there an overhang just here? Where the waterfall flowed off the cliffside, there is a hard and massive greenstone (transformed lava). The bedrock where the path goes, however, is a more easily weathered type, with mica rich phyllite. The soft phyllite has crumbled away more than the harder greenstone, thus creating an overhang.