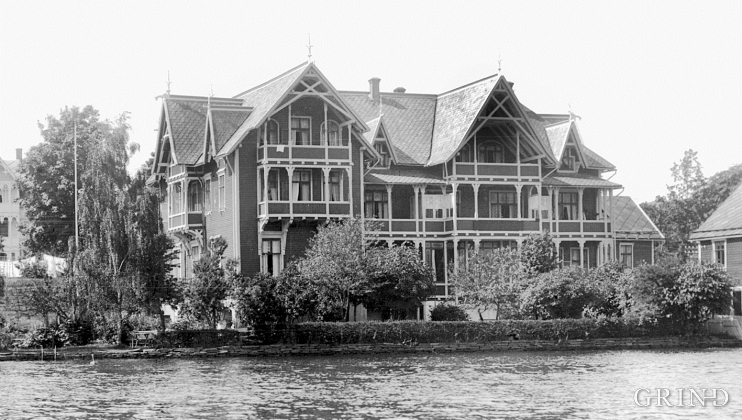 Sandven hotel, one of the larger hotels built in the Swiss style, which still exists in its original form, was built in 1897. (T. Lofthus, eigar: Universitetsmuseet i Bergen (Lo. 267)).

THE COASTAL COMMUNITY AND SANDVEN HOTEL

It is in the grounds of Sandven, one of the largest farms in Hardanger in the Middle Ages, that the coastal community has evolved. Already in the high Middle Ages the farmers from Steinsdalen had been allowed to put up their boatsheds here. From the end of the 1700s the tenant Knut Grovi started a little small trading, rope-making and tar burning, but it was only when the sloop owner Nils Sjurson Skutlaberg settled here in 1844, that the community started to take form. He built a boathouse and store in 1850, and was granted a trading licence in 1857. This also gave him the right to run a guesthouse and transport station, and thus the foundation was laid for what later became Sandven Hotel. Nils Skutlaberg took the name of Sandven, and became a veritable rural matador. The seat for the county administration was moved from Øystese to the “country store settlement of Sandven”, and here was port of call when the new steamship traffic started in 1861-62. Then the name Norheimsund became established for the coastal community – the name of the sound by the farm Norheim.