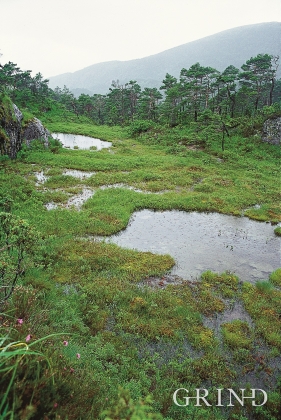 Many travellers between Mundheim and Gjermundshamn are captivated by the expansive view toward Øynefjord, Varaldsøy and Folgefonna. The barren pine forest on the slopes on the upper-side of the road is not seen by many. Who would think that this area is home to rare species of plants and animals, creatures who have made their homes here for thousands of years?

Geitaknottane nature preserve was established in 1997 in order to protect a unique biological ecosystem. The majority of the roughly 14 km² large preserve lies in Kvinnherad, but Kvam and Fusa also have responsibility for important parts of the protected area. Most of the preserve lies between 70 and 300 mas. To the northwest it goes up to 673 mas. at the top of Horga.

Geitaknottane is an unusually large and unspoiled natural area, especially considering that it lies in the lowlands. But, it is also rather barren of natural resources of interest to humans. The landscape is dominated by bedrock and knolls, marshes and lakes, ponds and small tarns. Naturalists were long fooled by its barren first impression. The enchanting natural treasures were not discovered until the 1900s.

Pine is the tree sort that does best in the preserve, but it must often survive in cracks in the rocks or on peat soil, as there are few loose sediment deposits. The trees are scattered and grow slowly; the crooked trunks seldom grow to more than a few metres high. One does not get much of a forest from these conditions. Many pine trees are old because they have been left to grow in peace for a long time.

One might expect that such a barren and thinly-forested area would have few species in its flora, but this is far from the case. In the bedrock there is greenstone and greenschist, which give a slightly acidic soil type, and many finicky species thrive here. In fractures and canyons, many plants grow that are rare not only in this district, but also in the country. There is more rich fen in Geitaknottane than any other place in Hordaland.

Geitaknottane has the largest occurrence of the great crested newt in the country, and probably in the whole world. This amphibian has the status of a rare and threatened species, but there are quite a lot of them here on the preserve. To find the explanation for this, much research has been carried out in the area in past years.

The great crested newt is registered in more than 100 ponds and tarns in Geitaknottane. It is thought that there are about a thousand individuals, but the population size varies from one year to the next. Most of the tarns are less than one metre deep. There is little vegetation in the newt ponds. Typical water plants are the bog bean and water lily. The newts overwinter on land, but come to their breeding pond in the spring, in April-May, to celebrate the "newt wedding". In the best ponds there can be several hundred newts. Most commonly, however, there are far fewer. They stay in the ponds until late July-August.

The great crested newt is not especially finicky about the water quality, but the water must not be too acidic. Preferably, the water should also be relatively clear. In southeast Norway this amphibian is mostly found in nutrient-rich ponds and forest tarns. In Trondelag and in western Norway it is more commonly found in marshy ponds.

The female lays her eggs one at a time on the water plants. She folds the leaves around the egg to protect against predators. After 2-3 weeks the eggs hatch, and out come the larvae, which look like a miniature adult. The larvae feed well all summer until they metamorphose, or change, from larvae to grown-up individuals. Then they go on land, and normally do not come back to the pond until they are sexually mature, at around 3-5 years of age. The great crested newt can be up to 15 years old.

The great crested newt has a varied diet, including small crustaceans, insects, harvest spiders and worms. They eat what they get a hold of, also their own offspring, if they make themselves available, both eggs and larvae.

The eggs and larvae of the great crested newt are also good nourishment for a number of predators, including fish. Therefore, it is very important that the newt ponds are not stocked with fish. As adults the newts are poisonous, however, and have few natural enemies. It is not dangerous to touch a great crested newt, but you should wash yourself afterwards. If you get newt poison in your mouth, you will certainly notice the poison. An English naturalist in the 1800s wanted to test this. He bit carefully into a newt, but soon after felt great pain in his mouth, got cramps, spit secretion, and a strong headache that lasted for several hours.

The great crested newt is found over most of Europe, from Great Britain and France, throughout Central Europe and east to the Urals. In Norway it lives in three main areas: in southeastern Norway, in Trondelag and in western Norway between Haugesund and Bergen. In addition to Geitaknottane, we know of several Smaller newt localities in Hardanger. It is also recorded in Samnanger, Os, Bergen, Sveio and Etne. In Norway we also have a smaller, common newt, but it doesn't occur naturally in Hordaland. In a pond in Svein Hovland's garden in Øystese, we have the only single free-living individuals in the country. They came with some water plants, but have managed to survive on their own for several decades.

The greatest threat to the newts is the destruction of their habitats and filling-in and draining of ponds, stocking with fish and pollution. The species is protected, pursuant to the wildlife law, and by international treaties Norway has a special responsibility. Geitaknottane is the first area of Norway to be protected especially to because of the great crested newt. It is of course forbidden to take the newt out of the preserve. The ponds where the newts live in the spring and summer are in quite moist marshes, which do not tolerate much traffic.

Aerial photo of parts of the Geitaknottane nature preserve in the boundary area between Kvam and Kvinnherad. We see Vestrevika in lower right. (Blom Norkart Mapping)

The barren outback in Geitaknottane has many ponds and small tarns that have been undisturbed through the years. The lakes and ponds have never been stocked with fish - and therefore the conditions are good for an unusually high abundance of the rare great crested newt. (Jan Rabben)

At Geitaknottane, in the area that lies in Kvam and Fusa communities, we find the beautiful, meter-high royal fern. This quite rare plant grows where it is moist throughout most of the summer. Typical habitats are stream canyons and along the edges of marshes, preferably close to rock walls. Such rock walls radiate warmth they have stored, and the local climate is therefore warm and favourable. The plant requires relatively high temperatures in summer, and does not tolerate frost. The royal fern is only found two places in Norway: in Kristiansand and in Outer Sogn. But the plant was more common before: traces of royal fern are found in several marshes in southern and western Norway, where the plant does not grow today. With the help of pollen analysis it has been shown that the royal fern had a much more widespread distribution during the warm period that set in after the end of the last Ice Age. It has probably grown at Geitaknottane for about 8000 years.

It is not a coincidence that the royal fern and the great crested newt live in the same area. They may have migrated in at the same time, when the climate was warmer. Since they both occur in high numbers, and their habitat has been undisturbed for thousands of years, they have managed to survive even though the climate is less favourable now than previously. We refer to this phenomenon as "relicts from a warmer time".