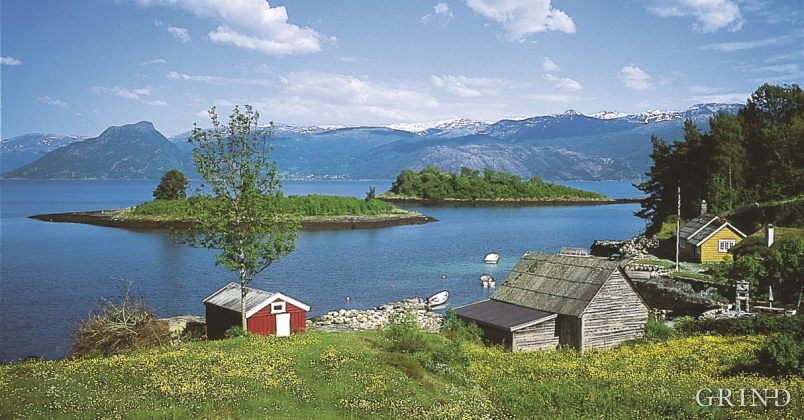 There are especially many seabirds inwards along the fjords of western Norway. There are not many islets, either, so if the birds want to nest, it is not always easy to find good sites. At Aksnesholmane there is an impressive colony of gulls, and the locality has been protected since 1923.

The Common Gull has had a problem many places along the coast, but at Aksnesholmane there has been a stable nesting colony for many years. Over a hundred pairs nest here, though the number varies from year to year, as does the production of youngsters. This is because the mink has only a short way from the fastland, so mink can be a serious problem during the nesting season. Perhaps it is to avoid the egg-thief that a number of gulls at Aksnesholmane build their nests in the trees. It is not often that gulls from western Norway have developed such as strategy. Some places the objective is probably to secure the nest from being ruined by flood, but this is not a problem for the nest-builders on the Aksnesholmane islets.

The Aksnesholmane islets are unusually lush, and there has been more growth of thicket and less trees in past years. The fields near active seabird colonies get a lot of good fertilizer from the birds. Vegetation growth can be so fast that the birds can be crowded out. Out on the coast they can easily choose another nesting islet under such conditions, but in Hardanger Fjord this is not possible, since there are almost no other islets nearby. This is why some of the forest and thickets on Aksnesholmane have been cut back in recent years.

Some tens of pairs of Mackerel Terns also nest on the islets, in addition to some few pairs of Oystercatchers. Also other coastal birds, such as the Red-breasted Merganser and Whimbrel are sometimes seen.