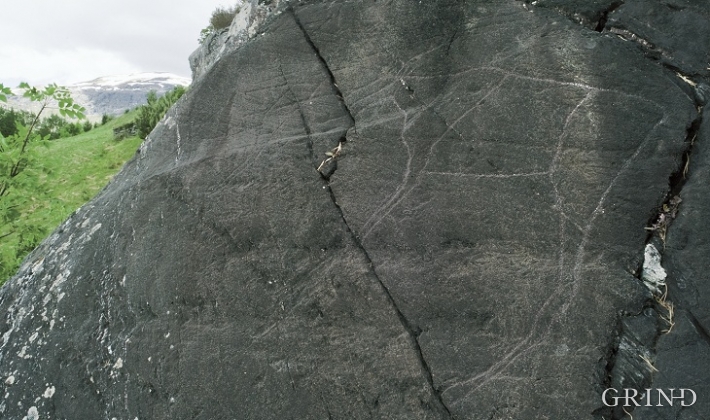 The hunter carvings are near the top of Salthamaren. (Svein Nord).

The carvings on the top of the rock belong to the main group of “hunter carvings”. It is thought they are from the Stone Age and may be 5,000 years old or more.

Here are several animal figures, but only two of them are still complete. One of them appears to depict an elk, the other one a red deer. The figures are carved with a steady hand, and show that the artist to a great extent was able to convey the animal body in an anatomically correct way.

We must therefore wonder why a couple of human figures appearing in the same section are drawn with such helplessness and naiveté. The carving technique is the same, and there is little doubt that they are from the same period as the animal figures. Is it a less able “artist” who has had a go here? Or could it be that human figures were supposed to be drawn in this manner?

The figures at the foot of the cliff are of a completely different type and belong to a different people. These are “agricultural carvings” from the Bronze Age, and may be around 3,000 years old.

There are supposed to be 22 figures in all, mostly ships. Of these 11 are certain and clear, while 8 are only scraps, where parts of keel-lines, rail-lines or “lines of crew” may be vaguely seen. Furthermore there are a couple of simple ring figures and one single shallow depression.

In this country it is very unusual that one and the same rock has carvings from both the main traditions of “rock art”. Thus Salthamaren is a rare exception.

The “agricultural” carvings at the bottom of the cliff. (Svein Nord).