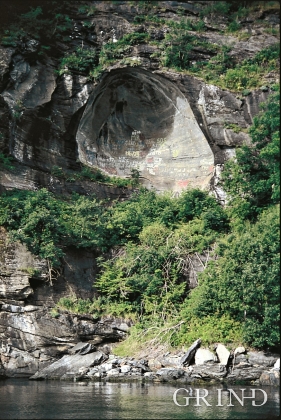 The legends say that the giant female trolls on either side of Fyksesundet Sound were enemies. The female troll on the west side grabbed and tore up the mountain on the east side. The mountainside loosened, and the female troll of the west side fell over and lost her stones. This is how Rossholmen came to lie in the middle of the sound. As she fell, the troll got her bottom stuck in the rock wall on her own side. Here, we see the round protrusion with the name "Gygaræve" (Giant female troll bottom").

Folk fantasy has often provided explanations for natural phenomena. "Gygaræve" is a 20-metre high half-pothole, with its protrusion facing upward. It was formed in mica schist just above the water surface on the west side of Fyksesund Sound, opposite Steinstø. The pothole is easily visible from the pier at Steinstø. It must have been formed by meltwater under the glacier, meltwater got squeezed up with great strength between the glacier and the mountainside. Sand and and gravel in the water will have functioned as polishing agents.