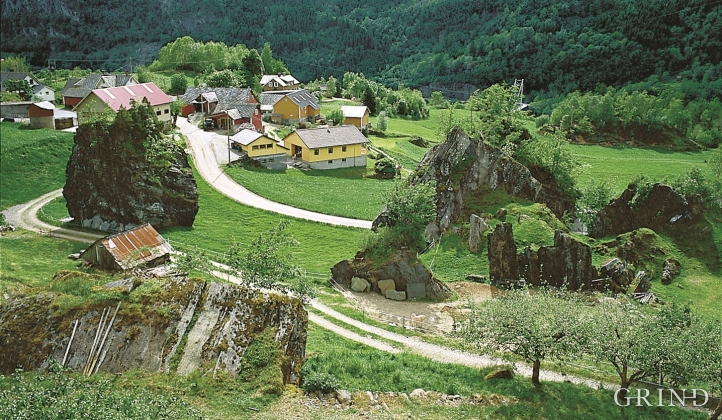 There is evidence of rockfalls and landslides many places in the county. But that the biggest landslide after the ice age went down the east side of Fyksesund Bridge is not easy to see. The farm road to Klyve goes through the farmyard at Fyksegardane Farm, where giant boulders are strewn all around. People living on the farm have long known that the ground was full of "cold holes" that were useful for food storage . Yes, so big that the fiddle playing farmer held a concert for up to 100 tourists in an 18-metre long and 4-metre high hall, "Døse", underground.

The road just north of the farm goes in a little valley, which marks the back boundary of the landslide. At the top of the slope we see the edge from which the slide let go at about 480 metres height. The eastern bridge tower of Fyksesundbrua is evidence that 10 million m3 now lie at rest. The bridge tower has stood in the middle of the landslide deposits since 1937.