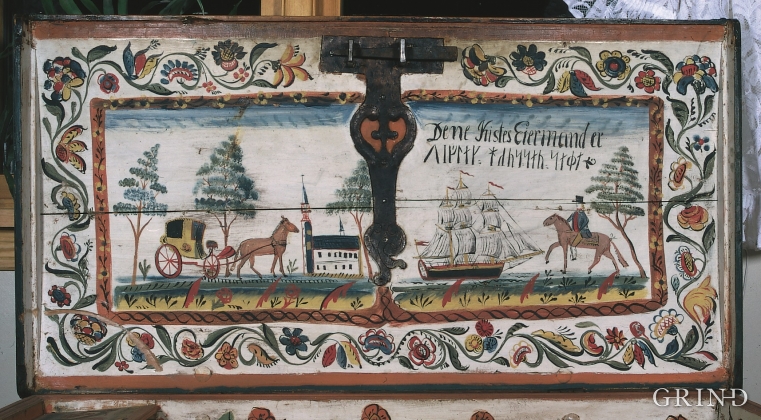 The chest from Sekse, painted by Gunnar Årekol in 1813. We see a charming composition of church, cart and rider, taken from a book: “The wise and sensible travelling teacher” (1804). The motif is surrounded by a colourful vine in the polychromatic style of the baroque. The name of the owner is written in runes. (Egil Korsnes).

On his smallholding “Hagen” (the Garden), belonging to the main estate Årekol in Grimo Gunnar Anfinsen Årekol (1784-1856) kept himself busy with several occupations: fruit and tobacco cultivation, traditional baking, match production, book binding – and decorative painting. Gunnar had poor health and was probably suffering from bone tuberculosis. The minister Nils Hertzberg took care of him and managed to arrest the illness, but Gunnar became disabled and was limping as a result of it. From Hertzberg he learned book-binding, and this must have been a good source of knowledge. Inscriptions on bowls and chests show that Gunnar mastered both German and Latin.

Gunnar was primarily a decorative painter, using strong colours on a red or white base, characterised by the colours and powerful shapes of the baroque. He used many of the motifs on the inside of chest lids, where he also recorded the name of the owner in runes. We recognise the grand style from church décor in the 1600s, roses on vines with multiple leaves, bunches of grapes and a poppy-like cut-through flower. The four-leafed rose in particular is a recurring theme on the many scarf boxes. This motif probably contains a symbolic reference, to bring luck to weddings and marriages. Gunnar Årekol has been influenced by the “scarf box painters” in Kvam, especially Per Andersson Århus from Steinsdalen (1757/58-1831).

Eastern men in the fjord settlements

The travelling rose painters from Telemark and Hallingdal had been steady annual guests in the fjord settlements through a generation. They were part of a great immigration of workers through the settlements; tradesmen, craftsmen, cattle drivers and haymakers. The first rose painters from Telemark turned up in Hardanger towards the end of the 1700s, but only from around 1820 did the large expansion come about. Roughly as many as 30-40% of the rose painters in Telemark sought to find permanent income in other settlements. Many also took part in the herring fisheries. It was a question of finding income wherever possible.

One of those who have attracted most myths is Thomas Luraas (1799-1866) from Tinn in Telemark. He lived an adventurous and far-flung life, and made regular painting trips to Hardanger and the Hordaland settlements for nearly 40 years, from the 1820s to 1860. Other well-known men from the east were Bjørn Bjaalid (1791-1859), Jon Torbjørnson Geiskelid (1798-1866) and Hans Olavsson Glittenberg. They were accomplished and sought-after painters and came year after year, as long as there were profits in this handcraft production.