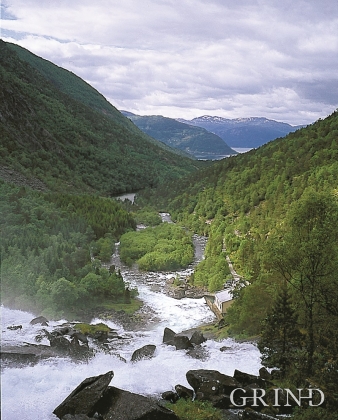 The stretch of the Kinso where the salmon run is only 4.5 kilometres. In 1923 a salmon ladder was built, but it is now long gone. During the period from 1969-1988, an average of 41 sea trout and 19 salmon were caught per year, and the average weight of them was 1.3 and 4.9 kilograms, respectively. The number is not so large, but at least the increase in fish has not been disappointing in recent times. Neither has the river had problems with pollution - pH values in March, 1999, were just under 7.0 and the water contained much calcium. The river has healthy populations of the mayfly Baëtis rhodani, which is known to be vulnerable to acidic conditions.

The size of the baby salmon in the Kinso River is consistent with them wandering out to sea as smolt during their third spring. In many rivers they leave earlier, but in the Kinso there are apparently some real veterans among these "youngsters". Some of these are in fact real homebodies, up to 8 years old. No one knows why some fish wait such a long time before they first leave the river.

Most of Kinso's 282 km² -large catchment area lies within the Hardangervidda National Park. The whole water system is now eternally protected against further hydroelectric development, but the Tveitafoss Hydroelectric power station (picture to left) has been in operation since 1917. This power regulation has no influence on the fish. In Vivippo, a tributary of the Kinso, there is an unusually elaborate mini-power plant.