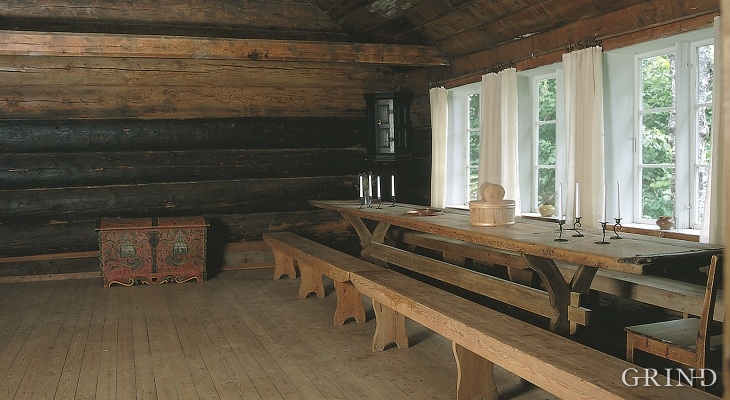 The farm Jåstad, situated a few kilometres north of Agatunet, must have been a grand farm in medieval times. Torolf on Jåstad is mentioned as arbitration moderator in 1293, and in the vaulted corridor at Lyse Kloster Sigurd, farmer at Jåstad, and his wife Sigrid – the king’s kinswoman - are buried.

The old smokehouse at Indre Jåstad was moved to Hardanger Folk High School in 1925, where the house stands today. In the gable wall above the door into the main room, this inscription is carved in runes:

Haakon Shetelig informs us in 1904 that the runes are “placed outside on the house’s southern gable and now faces the small ante-room that is built in front of the entrance. Above the door the logs are cut flat as there has been a small bed-loft in front of the gable with a small hatch into the living room”. This must refer to a so-called “ramloft”, probably added in the Middle Ages, but later removed. Jåstadstova came under protection in 1924.