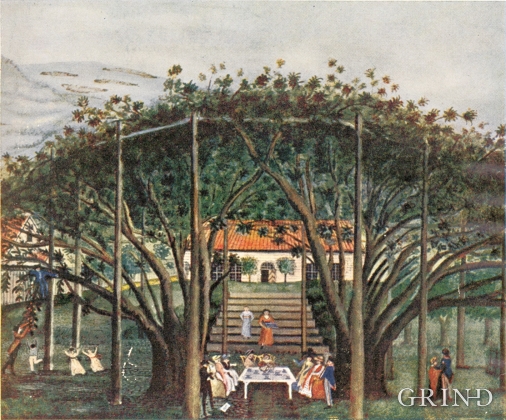 Watercolour of fruit orchard and vicarage in Ullensvang, painted by Priest Niels Hertzberg around the year 1820.

Well over 200 years ago, the priest Niels Hertzberg started making climate observations at the vicarage at Lofthus in Ullensvang. Hertzberg was active and ahead of his time in many fields, and had a great interest in natural science. Temperature and pressure were measured daily at the vicarage - often several times a day - with homemade instruments. The meteorological measurements started in December of 1797, and were carried out continuously until 1840, the year before he died.

The successor who took over Hertzberg's office did not share his same interests, and it marked the end of the observations when he took over the vicarage. But in 1865, priest Hans Irgens took up the routine again of daily temperature measurements. And the tradition has been continued since Irgen's time, with only minor interruptions.

The observations in Ullensvang during the years 1979- 1840 are of special interest, since these are the oldest complete temperature- and air pressure observations carried out in Norway over such a long time. The academic community in Europe was aware of these measurements from early on. Hertzberg himself published the first 15 years of his series of measurements in 1813 in Historisk-Philosophiske Samlinger. ("The Historical-Philosophical Collections"). The 25-year series came out in Magazin for Naturvidenskab ("Journal of Natural Science") in 1824. In 1831 von Kämtz included the average temperatures from this series in his Lehrbuch der Meteorologie ( "Textbook of Meteorology"). From this textbook, the climate tables from Ullensvang were copied into many subsequent textbooks.