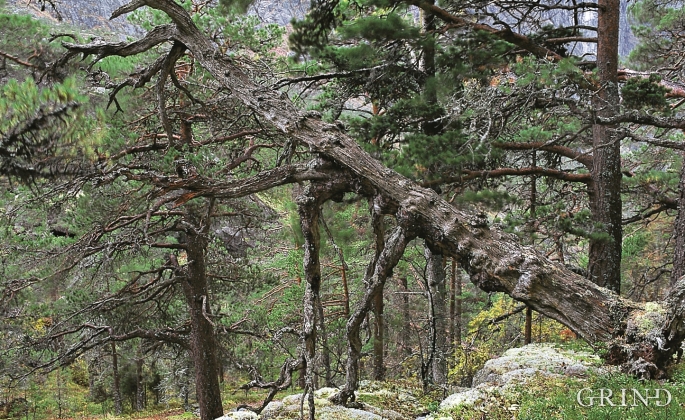 Hardangervidda has no more beautiful entryway for hikers than Husedalen. The river, its waterfalls and the expansive landscape is well known; less noticed is the characteristic, ancient pine forest on the south-facing slope above the power plant.

It is not unusual to find pine trees that are older than 350 years old in this forest. The top of the trees' crowns are flat, a sign that the tree has stopped growing upward. Both gaddar, dead trees that stand upright, and læger, tree trunks lying on the ground, are sure signs of age. The oldest forest grows high up on the slope. It was heavy work to chop down trees in such terrain. That is the reason why so many old trees are left standing.

Some decades ago a stand of pine forest was ravaged by forest fire. The old pine trees were lost in the fire. Some remnants are left, as coreless, grey and completely dried out trunks. After the fire, there were good growing conditions for new forest. In addition to pine, a lot of birch and aspen has grown up on the burned surface. In another part of Husedalen, giant aspen trees grow, that perhaps have germinated after a fire, quite a long time ago. Forest fire can easily be triggered by lightening in this pine forest, since the summer climate in Husedalen is relatively warm and dry.

Some characteristics in the vegetation distinguish this forest from much of the pine forest in other parts of the county. In the part of the Husedalen pine forest that faces toward the south and west, there is sometimes a lot of lichen. Such lichen-dominated pine forest is more typical of the dry and nutrient-depleted ground in the eastern part of the country, than in the west. Also, the forest floor has few species, and tree growth is quite slow. In addition to lichen there is a lot of moss. Especially the combination of star-tipped reindeer lichen, reindeer moss and woolly fringe moss gives the forest floor a light colour, which is easily visible from a distance. Among the mats of lichen and moss there are also some hardy heather species, mainly common heather and bog bilberry.

But, the deciduous forest comprises only a part of the pine forest in Husedalen. In places with more loose sediment deposits and deeper soil, the forest is more lush. Among the blueberry and mountain cranberry, several types of evergreen plants grow, among them one-sided wintergreen, intermediate wintergreen, snowline pyrola and green pyrola. The latter is an eastern plant and grows best in the inner parts of the county, preferably in the same type of forest as the creeping lady's tresses orchid.

The Redstart is rare in western Norway, but is found in old pine forests, most often in the inner valleys, as in Husedalen. (Thor Østbye)