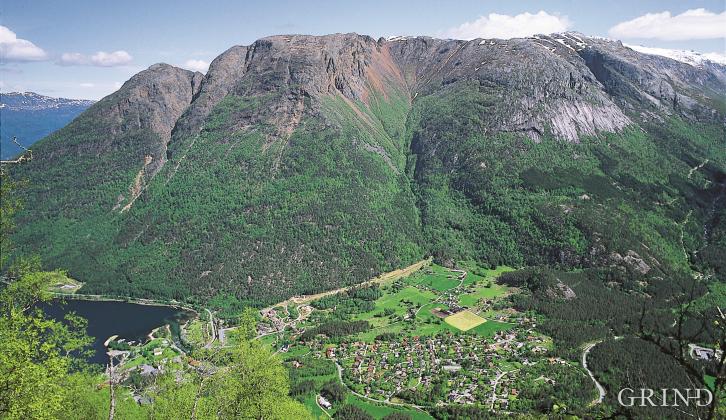 Housing development Huse in Kinsarvik. Above the settlement the red shoulders of the prominence Raudnosi dominate. Solbjørgane is the mountain to the right. (Svein Nord)

RADON GAS IN THE GROUND

The country's most comprehensive mapping of radon in homes has been carried out in the housing development Huse in Kinsarvik. This is because quite high and varying values of this radioactive gas have been measured in many homes in the development. In the most extreme cases, radon concentrations of more than 40 000 Becquerel (Bq) pr.m³ have been measured. This is far above 200 Bq/m³, which the level the Government Radiation Protection Agency recommends as the limit above which precautionary measures should be set in place.

Everywhere in nature, there are small amounts of radioactivity that come from hard bedrock or loose sediment deposits. Radon is formed by the breaking down of radium, and is a radioactive inert gas that itself quickly gets broken down. In fact, it takes only about four days before half of the existing amount of radon is transformed into another element. Since radon is a gas, the radioactivity is easily transported from the source into people's homes.

Investigations at Huse show that the content of radium in the sediment deposits under the housing development is a little higher than usual. But the reason for the extraordinarily high concentrations and the large variations appeared to be first and foremost related to the special layering of the deposits. This, together with the fact that the deposits are very permeable to air, created an unusually effective «gas corridor» from the source into the homes.

In order to understand the special layering, one must go far back in time. About 11 5000 years ago, a valley glacier from the plateau extended down Husedalen Valley. Moraine deposits of gravel and sand were deposited in front of the glacier up to the level of the sea, which at that time was 110 metres higher than today's fjord level. Meanwhile, large stone blocks fell down from the steep mountainsides and formed a cover over the ice when it melted. When the ice disappeared, the sea came in. On the new seafloor the blocks lay on top of the moraine deposits.

But, the deposits did not get to rest in peace: some were removed, while others kept arriving. First, waves and sea currents were responsible for the mass movement. At the same time as the land rose, the sea receded, and the coarse deposits were covered by a tight "lid" made of sand. Later, when the sea floor became dry land because of land elevation, the power of the river took over the storage work.

Despite much of the coarse sediment being covered by sand, there were still blocks nearly as big as houses that remain on the surface. Several stories are told about a bottomless hole where tools simply disappear.

Measures have been taken to reduce the radon concentrations in the most vulnerable homes. The most common measures taken include sealing the construction as close to the ground as possible, improving ventilation and changing the pressure differences between the indoor air and the ground. In several cases it has nonetheless been difficult to achieve the accepted limit of 200 Bq/m³, since the concentrations were so high to begin with.