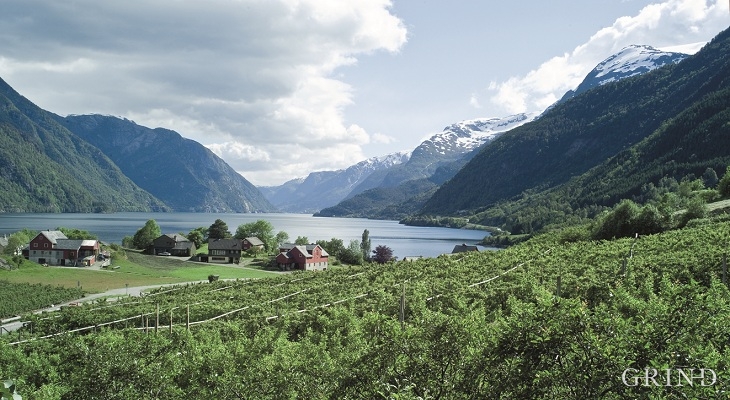 A STONE INDUSTRY GOING BACK 2,000 YEARS

Steatite is a type of stone that is abundant in Hardanger. There are large steatite deposits in the mountain below Folgefonna. These deposits are visible both in Krossdalen in Jondal, at Kveitno in Odda and at Måge in Ullensvang. There are many traces of steatite quarrying in Hardanger, and one of the largest fields is in the hillside above Måge.

Steatite has special qualities. The stone is heavy and soft and has the ability to conserve heat. These qualities have been used in various ways, for shaping fishing weights, for weights for the loom, or “kljåsteinar”, for casting moulds, for cooking pots and paving slabs. Cooking pots made of steatite have been used in Norway from before the birth of Christ, but industry on a large scale did not come about until Viking times and the Middle Ages. The finely profiled building stone in medieval churches is steatite. But the use of steatite in cooking pots actually goes back 2,000 years. The pots were shaped with pick axe and chisel the pots were roughly shaped, to stand out as a plug out from the rock wall. Then the pot was cut loose, hollowed out and polished. The steatite pots had the great advantage that heating was even, the pots kept the heat and the porridge was not burned.

From the underground passages of the Raudesteinane soapstone quarry (Jan Rabben).

A day at the beginning of the 1900s two boys out playing at Måge found hidden in a great mound of stones a steatite pot full of silver coins, an entire silver treasure. The steatite pot, that stemmed from Viking times, turned out to be filled with 240 silver coins, three silver rings and two pieces of bronze. Of the coins there were four German and eight French pennies, while the rest were Norwegian. Some of the coins had been made during the time of king Magnus the Good (1035-47) and Harald Hardråde (1046-66), but most of them from the brothers Magnus (1066-69) and Olav Kyrre (1066-93). The coins show that the entire treasure must have been stuck away some time after 1080.