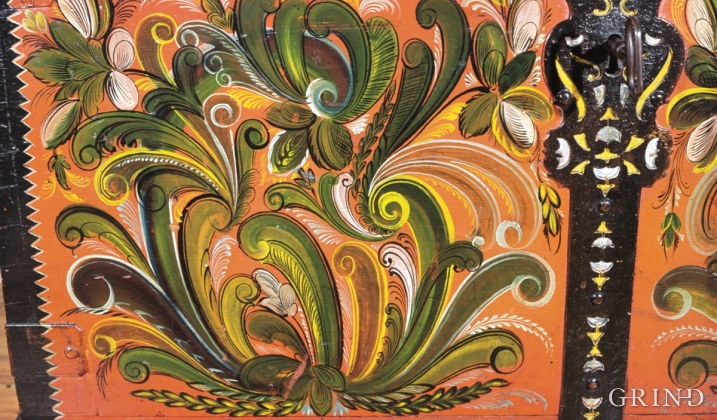 The “sòle” chests could be found in several types and price ranges, from the simplest template painting to more elaborate chests like this one, painted by Trond Larsson Hus. (Nils Georg Brekke).

In his house at Ålmerket at Kinsarvik Trond Larsson Hus (1806-1878) for many years ran a flourishing trading business. He was one of the central figures behind the production of “sòlekister”, decorative chests, in Ullensvang, rose-painted chests for sale in the town. Trond was a smallholder and coast dweller, he was a gifted man in the area, and became a teacher at the ambulatory school already in 1825, but it was as a decorate painter that he left his mark. According to accounts, he learned the art from the man from Telemark County, Bjørn Bjaalid, but it is the style of Thomas Luraas, that characterises his chests. The chests that were sent to Bergen with the sloop skippers and sold at Strandsiden, had a rather simplified Telemark décor. This semi-industrial craft production became extensive in the second halt of the 19th C. About ten painters were in full swing, and close on 1,000 “Harding” chests were exported from Sørfjorden in any one year. At times “Trond in Vikje” cooperated with his cousin, Johannes Jonsson Kjerland from Granvin. He had attended Den Nyttige Selskabs drawing school in Bergen and worked at Prahl’s lithographic establishment - a man with academic knowledge and one of West Norway’s best trained rose painters.

This environment was Lars Kinsarvik’s background (1846-1925), Trond’s son. He learned the art from his father and after three years education in Bergen, he took over the painting business in Kinsarvik. He took on all types of paintings, also house painting, but by and by he started with wood carving in the winter, in the national romantic acanthus (leaf) style, and this was a field where Lars Kinsarvik developed into becoming one of the key figures in the “national” wood-carving milieu at the end of the 1800s. Through the years many learned the art of wood carving at the workshop in Kinsarvik.