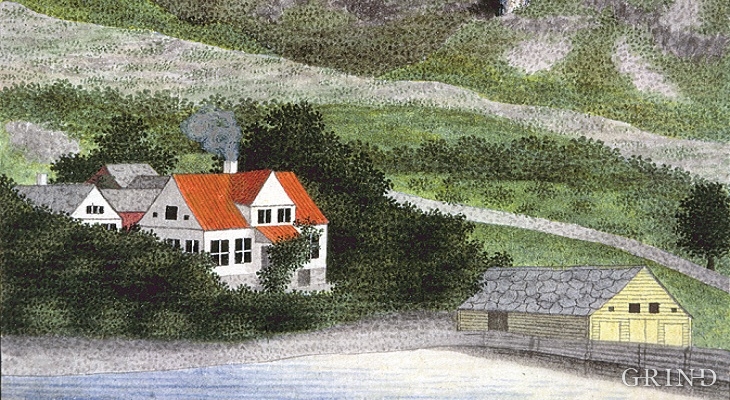 The old “recorder residence” at Helleland has been both residence for the district recorder and officer’s residence. The main building, which came under protection in 1924, was built in 1764 by the curate Christian Heiberg. When he was appointed parish priest in Jølster, he sold the farm to the state employee Geelmuyden, who resold the farm to Hans De Knagenhielm in 1774. He was the head of “Søndre Hardangerske kompani” (a local army division).

The main building of the old recorder residence, protected in 1924, was rebuilt in the Swiss style at the change of ownership in 1880. The only remnant  of the original interior is the grand sitting room to the north “the hall”, with doors, mouldings, floor skirting, mock marble door panels and an original pine floor from the 18th C. This building now became the central building in a Norwegian justice museum, moved to a new site directly across the road from the former district recorder residence at Helleland.

A rose-decorated room from the renaissance period

During the demolition of a house at Helleland from the 1880s planks were unearthed that had lain as double floor between the beams. Beautiful decorations in size colours were cut in all directions. Large rosettes in lead grey and black on a light ochre base, contrasted with English red arabesque vines between the rosettes, were visible, and following a meticulous reconstruction work, the original décor emerged. The planks belonged to a ceiling with six board sections.

Some of the planks must have belonged in a decorated wall panel. It shows a popular motif through the ages, a couple on an outing, here dressed in the typical attire of the 1600s. This has been a grand rose-decorated house, here on one of the holdings at Helleland, probably decorated by one of the guild painters who had a commission in the church in Ullensvang early in the 1600s.