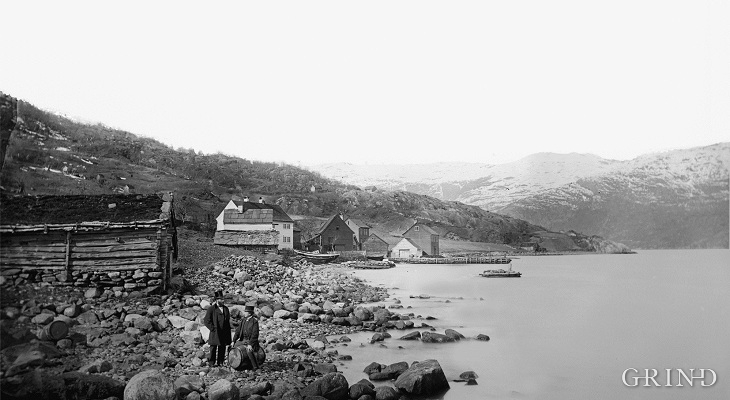 When sergeant Peder Larsen Børsem from Strandebarm was “demobilised” in 1721, following the large Nordic War, he married the Bergen lady Elisabeth Schrøder and settled as innkeeper at Utne with a letter of privilege from the county governor dated 29 October 1722.

Of information at the court in 1739 it emerges that Peder Børsem had “put great Expenses in the necessary Inn, in order to build the Houses”. This is probably the oldest part of Utne Hotel today. The innkeeper died from it all in 1735, and the guesthouse place was taken over by “Elisabeth, the diseased Peder Børsem’s widow.” The tax collector was of the opinion that it was no longer necessary for further inn-keeping neither

But the guesthouse place was not closed down. In 1789 Johannes Sveinsson Winæs became innkeeper. He was a sloop skipper and carried on trading and sloop freighting with his own vessels, grain, salt and all types of “Necessities”. Utne became the key trading post in inner Hardanger, and in 1828 his two sons took over the business; Jakob as a trader and Johan as innkeeper. In 1829 a transport station was established here, and the innkeeper was granted the management of the station. The guest-book, which can still be found at Utne, shows that many well-known persons have benefited from the hospitality here, such as:

P.Chr.Asbjørnsen, KristofferJanson, Adolph Tidemand and Eilif Peterssen. Johan Winæs became married to Torbjørg Utne, or “Mor Utne” (Mother Utne), as she became known. She managed the business for 70 years from 1833 to 1903, and she was the one to establish the first hotel in Hardanger.

Utne Hotell today – a cultural foundation of its own – with an exterior in the Swiss architectural style – towards the end of the 1800s. (Svein Nord)

The settlement at the fjord

Where the Hardanger fjord divides in the fjord arms into Granvin, Ulvik, Osa, Eidfjord and Odda, lies Utne, and old farm with a non-jointed name, which nobody has managed to interpret. Utne is situated centrally on the route along the Hardanger fjord, and it is not by chance that a guesthouse place was established here. But it must have been the court location from 1728 that formed the basis for the later settlement by the fjord. The court gatherings of the coastal administration districts would move from farm to farm, and the new guesthouse settlements, after the law of 1648, took over these court gatherings, where appropriate. At the Utne court, farmers met from Røldal to Kjepso at Ålvik, and this provided generous profits for the innkeeper. It is likely that the “court house” at the hotel was erected around 1730. And it was probably Jacob Winess, who, a hundred years later, in 1828, built the grand two-storied residence in Empire style, halfway up the “Sjoa road” when he took over the trading business. This building, which is called “Brochhuset”, was called “Jacobshuset” or “the trading place” right up to the 1900s, to separate it from the guesthouse place down by the fjord. And this is how the place developed in the 1800s. From 1830 the tourist traffic was on the increase; in 1836 Hardanger’s first post-office was opened here, and Utne provided the postal services to Eide in Granvin right up to 1861, when the first steamship route from Bergen to Odda was opened.