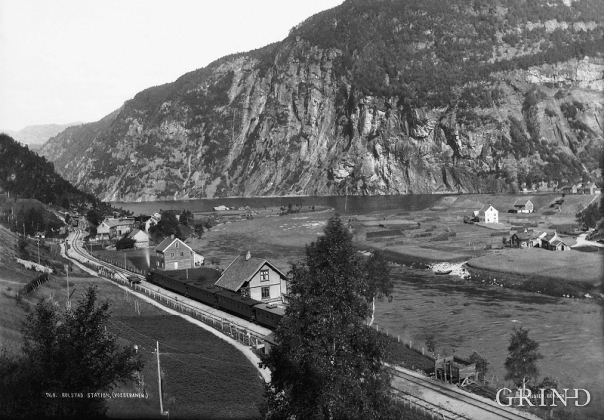 The village at Bolstadøyri acquired its structure around the middle of the 1800s, but from the old days there has been a meeting place here; court location and trading post. The guesthouse place stems from the second half of the 17th century, and in the previous century Bolstadøyri was one of the largest rural trading posts in Nordhordland.

The guesthouse standing at Bolstadøyri today is from the 1830s, a symmetrical building in the Empire style with hipped roof. The oldest part is supposed to be from 1663. At the end of the 1600 Nils P.Hjermand settled here as guesthouse keeper. He was a citizen of Bergen, but did not have a royal licence. In 1702 Henrik Weinwick was granted a licence to operate as guesthouse keeper both at Vossevangen and at Bolstadøyri. The old courthouse is situated close to the guesthouse.

Both vesser and vassvøringer  met at Øyri when heading out for town. History tells us that they formed “town parties” or “boat parties” and hired an Ostra ship or a Voss ship. This they loaded with butter and cheese and other goods. With favourable weather such a party could row to Bergen in 2 to 3 days, with contrary wind the trip could take up to a week.

At the fjord at Bolstadøyri the old post quay is still in existence; now being restored, and plans are afoot to rebuild a small sea house that was nearby, in order to renew the tradition of sea travel to and from the Voss communities.

The old post road between Bergen and Oslo passed over Bolstadøyri. From Bergen the road went across Nattland, by Grimen and Langedalen to Indre Arna and Tunes, before it entered Sørfjorden to Stanghelle, then across land to Dalseid and across Bolstadfjorden to Bolstadøyri. The farm Tysso at Bolstadfjorden was a post farm. When the ice was unsafe, the post carrier took the route across the Fyres Mountain and then to the next post farm, Horvei. In the summer season the postal route went across Evanger lake, but when there was bad ice here the route had to take another route, from Horvei, up the steep Storestigen, across Bjørgo and Brunborg to Evanger. Both these routes, Tysso-Horvei and Horvei-Evanger today are fine recreational paths.

The sea route from the Voss communities

From the Middle Ages up through the centuries we know that the road down the valley to Evanger “the Voss people’s valley” across Evangervatnet to Bolstad and out in Bolstadfjorden, was the central sea route and town route for the people of Voss. In the “leidang” arrangement the Voss region was also obliged to equip long ships. In a medieval letter from 1398 it is mentioned that the Voss farmers were to build a new battle ship at Bolstad. The keel was to be 60 feet long and every man in Voss who paid duties and taxes to the king, should participate in sharing the expense.

It is possible to imagine that the war ships in the Middle Ages had a berthing place below the shallow Bolstad current, especially during the winter, when
Bolstadfjorden was frozen. The most obvious place would be the bay at Skipshelleren.

The sea route across Bolstad was also the common route for the court attendants. After the regulations of 1784 state employees had the right of free transport. The farmers had an obligation to ferry them, which could be a great nuisance. In the new ferry act of 1816 the free transport was revoked, and permanent transport stations were established. But already in 1757 the guesthouse keeper at Bolstadøyri, Chirstopher Andersen, informed the tax collector that “he had to keep ships and boats ready for every arriving and departing traveller…”

So important was this traffic that when the new times arrived, with steamships and regular schedules, Bolstad became one of the stops on the route into Sørfjorden. But first, the Bolstad current had to be deepened. Factory owner Johan Jebsen in Ytre Arna in 1868 put the steamship Arne into traffic between Ytre Arna and Bergen. In the years until the Voss railway was opened in 1883 this steamship route was the main connection between Bergen and the Voss communities.

Later on D/S Voss, built in 1870, put into the traffic at Bolstad. Evanger also acquired a steamship that was in traffic on the Evanger lake: D/S Evanger, built in 1877, the same year as the Arna was built. For many years this boat was in regular traffic at Bolstad. The communities around the Osterfjord acquired the boat Osterø in 1880, and Ole Bull Dampskibsselskab put Ole Bull in traffic in 1884 on Sørfjorden and Bolstadfjorden. Later on these companies were merged to “Indre Nordhordland Dampbåtlag L/L”.