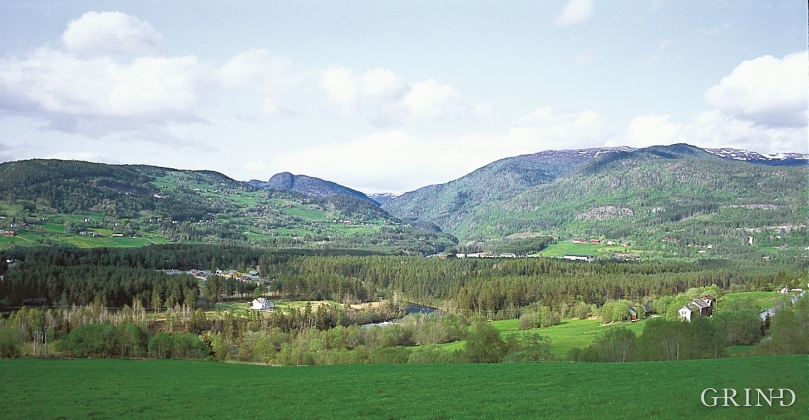 Bømoen toward the north. (Svein Nord)

Most of the flat sand- and gravel plains in Hordaland are deposited as deltas out in the fjords at the end of the last Ice Age. Bømoen has another creation saga, since the fjord did not reach above Palmafossen after the Ice Age. Further up the glacier ended on land, and when it melted, the front migrated up along the valley. The glacier melt 11,000 years ago created enormous meltwater rivers, much bigger than known catastrophic floods in recent times. The meltwater under the glacier carved into moraine masses and transported sand and gravel to the front of the glacier, where they were deposited on a large plain, an outwash plain or sandur (from Icelandic). Thus, Bomoen was formed.

Isolated clumps of ice, that were left when the glacier melted back, were flanged with sand and gravel. Such relics were left lying around long before they melted. The biggest block of ice lay between where the monumental stone and the airstrip now are situated. When a block melted, a depression was formed. The depression reached down under the groundwater level, and now there is a "dead ice" tarn, or a so-called "kettle hole", Ostjørni, in what is left of the depression.

The glacier front stopped for a time at the narrowing of the valley, north of Bjørke, and some fine kettle holes were carved here, also. This can be seen at Raundalselvi, right by the shooting range. On the slope up toward the railway there is a long sand- and gravel ridge. This is a pebble ridge or esker. The ridge was deposited in a meltwater tunnel under the ice. The gravel ridges that form Leikeshovden and Tundshovden are also eskers created in tunnels under the ice before it melted back.

The large gravel quarry at Bjørke is a good place for studying the deposits. The layers are more or less flat, but they alternate a lot in grain size, and reflecting the variations in the water supply.

Kettle holes in the canyon down toward Bjørkemoen. (Svein Nord)