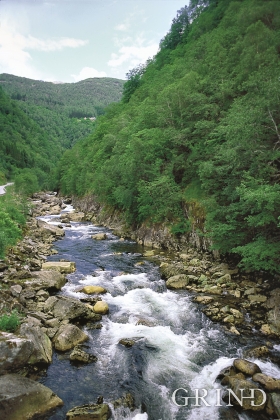 Just north of the lowermost bridge in Teigdalen lies Fadnesskaret.The valley side is exposed to cold air that comes down the valley - there is therefore a danger of early night frosts in autumn. When the valley sides in addition do not face south, it is difficult to persuade many of the most warm-loving deciduous trees to live there. However, there probably exists some individual large trees of basswood, elm and ash that have gotten a foothold on the steep hillside. But first and foremost it is the grey alder that dominates - a tree sort that is quite abundant in Teigdalen, together with hazel and buckthorn.

Hardy types such as large white buttercup and ostrich fern grow in the forest, while bear's-garlic and a number of other plants typical of the coast are absent. The distance to the coast and fjord thus give this deciduous forest an inland character.