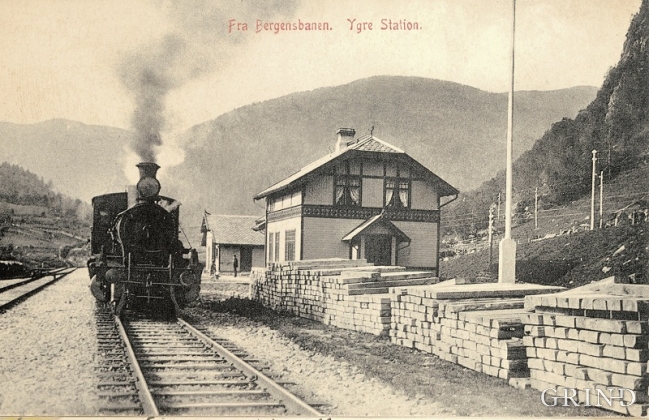 Ygre Station lies hidden away for highway travellers, just below the road Vossevangen-Mjølfjell. The station building at Ygre was constructed at Nesttun station in 1879-80. Almost all the stations at the Voss railway were identical. The architect was Balthazar Lange, and the type was called subsidiary station No.4. It is built in the Swiss style, as fashion of the times demanded.

Ygre is the only one of the old Voss railway stations that still has its roof overhang intact. From here people could walk dry shod to the train, the platform edge was close to the overhang. In 1904 a completely new station building was erected at Nesttun (pulled down in 1981), while the old one was moved to Ygre. In the early days of the Voss railway such a building housed everything. Downstairs was the office, waiting room, goods handling and toilet. Above was the residence for the stationmaster and his wife and children.

Thus the best preserved Voss railway station now is on the Bergen line. The outhouses at Ygre are of the same age as the Bergen railway. Railway architect here was Due. Urland, the station past Ygre, is a fine example of the “Bergen railway style”. Both stations have been recently painted up in the old style, in several colours, which emphasises the fine mouldings.

At Voss work is now in progress to preserve Ygre as a cultural monument.

In 1875 it was decided to build The Voss Railway, which was opened in 1883. The construction work was difficult and dangerous, especially along Sørfjorden, Bostadfjorden and Evangervatnet. In many places the workmen rowed to their workplace, as from Tysso on the other side of Bolstadfjorden. They often lived on the farms along the route. Some of them were Swedish “rallars” (casual labour).

Fine craftwork can be seen in all the concreted arches along the line. They were constructed between 1918 and 1932, to protect against stones and ice blocks. The danger of avalanches was such that in the winter there was only one train running in each direction all the way to Voss in the initial period. Then they were able to run the most dangerous stretch between Trengereid and Evanger during daylight hours.

At Voss the railway led to a complete rebirth of the industry in the community. Now it was possible to send the roof slate out of the area. The timber could be cut into planks and boards. Before the whole logs had to be sent down the river. Milk could be sold to Bergen. Army exercise grounds and schools were established at Voss, and Vangen developed as a commercial centre. Earlier, almost the entire population had worked in agriculture, now several other industries were added.