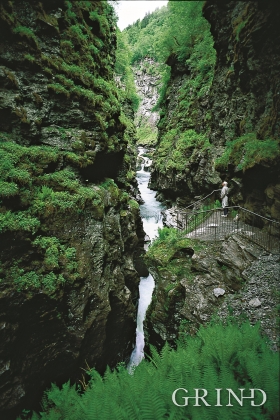 Deep down between the stone polished phyllite bedrock in Bordalsgjelet canyon, there is a cascading river. In close cooperation with hard polishing stones, the water has carved into the bedrock for thousands of years - and is still doing so today.

Voss municipality has made a nature trail into the narrow canyon at the mouth of Bordalen and so made it possible to relive an unusual happening. "Gjel" is the name of a narrow, river-formed V-shaped valley. If the V-shaped valley is extra narrow, as is the Bordal Canyon, this is usually testimony to a young age. Similarly, as in Tokagjelet Canyon, Bordal Canyon is the connection between an old valley (Bordalen) and a younger valley (the valley Lake Vangsvatnet lies in). We see this best if we take the trip up into Bordalen. The farms lie on wide valley shelves on each side of the upper part of the canyon. Before the ice ages these shelves were the valley bottom. Then, the river ran gently down to the old Vossa valley, which at this time was about 100 metres higher than today (a in the diagram). During the ice ages, the main valley got carved down deeper than Bordalen (b). After Lake Vangsvatnet was carved out, the side river running in from Bordalen got a larger fall and more energy - enough of a foothold to carve a canyon.

The bedrock in the Bordal Canyon and otherwise in the lowland around Vangsvatnet is phyllite. Phyllite is easy for rivers to carve, especially when they carry harder stones to scour out the bottom. The Bordalselva river follows two fracture directions: northwest-southeast and northeast-southwest. The river therefore often changes direction, as occurs just below Gjernesbrua, where the river channel curves at an angle of 90°. Further inward, the canyon also has narrow straight angles that follow these directions. The reason that the canyon is so narrow is that landslides from the sides, which over a long period of time widen the narrow valley, have not managed to keep up with the river's carving into the bottom.

The water must force its way through the narrow river, and uneven mountain sides cause swirls that form eddies where stones grind into the mountainside. This is how the half- potholes right under Gjernesbrua were formed. There are remains of other potholes further inward in the canyon. Up on the mountainside one can see the remains of similar old, partly eroded grinding sculptures. This shows where the water ran at the end of the ice age when the canyon was shallower. Now the grinding into the bottom is strongest during periods of flooding, but there was even more water and better access to polishing rocks at the end of the last Ice Age.

If you would like a botanical treat, you should look for muskroot, a little plant that grows beside the path in the canyon. The small and characteristic flowers are green coloured. You see them best in May.