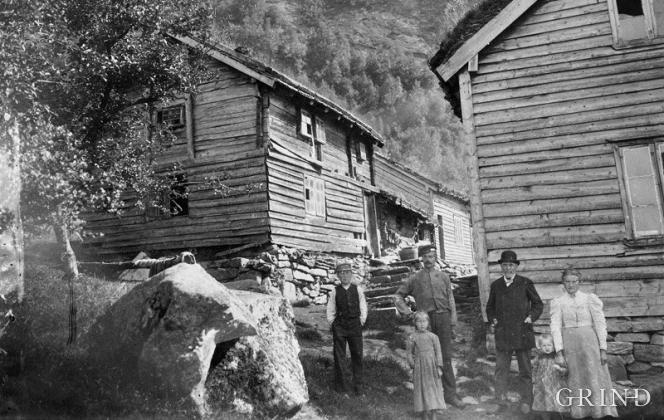 The story of Knute Nelson is like the story of Jack the Dullard. From narrow and poor conditions in his home country he worked his way up to become governor and senator in the US.

Knut was born in 1842 in the house at Kvilekvål in Evanger. His mother, Ingebjørg, was unmarried and had to provide for the boy on her own. When he was seven years old, she borrowed money and took the son with her to America.  Despite difficulties and adversity Knute Nelson, as he now called himself, acquired an education as lawyer, and practiced as an advocate beside his farming activities. He was elected governor of Minnesota in 1892, and senator in 1895, as the first Scandinavian. He was later re-elected time after time and sat in the Senate in Washington for 28 years. He was greatly involved in the law-making processes, and for many years he was the chairman of the law committee in Congress.

Outside the congress building in St. Paul, Minnesota a large monument has been erected to Knute Nelson, and similarly a memorial to him has been erected at Evanger. Knute Nelson never lost his interest in his native country and visited the community twice. The house in which he was born is still in good condition.

Kvilekvål with the house where Knute Nelson was born. (Svein Nord)

The emigration to America

The first major wave of emigration from Norway to North America started in the middle of the 1830s. The goal for the large part of the emigrants was Chicago and the surrounding areas, in the first period Wisconsin. It was the opening of the Erie Canal that made it possible to take possession of and colonise the countryside around the great lakes. The enormous expanses of fertile land was the great attraction. It was largely country people with experience of agriculture who were in the majority of emigrants in the time from the 1830s and after.

During this phase a lot of Voss people joined in. As early as 1836 the first family left, a couple with three small children. In 1843 was the first year in which more than a hundred people left from the rural communities, and in 1850 more than 400 people left Voss for America.

Who were theses emigrants? At least during the years from 1836 up to the American Civil War, the majority of emigrants from Voss were young farmer families. They were couples between 25 and 45 years old with children and they were farm owners. They raised money for the trip and all necessary equipment by selling their farms. In the year 1850 alone more than 50 farms changed hands in the Voss communities. Also in these early times there were young unmarried men without farms who left, but they were still few. After the 1850s it was different.

During the time from 1836 to 1914 between 5,000 and 6,000 people from Voss went to America. In the 35 years from 1801 to 1836 the population of the community had risen from 7036 to 9450. Despite war and destitution at the beginning of the period, this period led to the biggest population increase experienced up to then. By all accounts this increase would have continued during the next generation, but this is not what happened: in 1875 – 40 years later the population was the same as in 1836; around 9500 people. The surplus population had emigrated across the Atlantic.