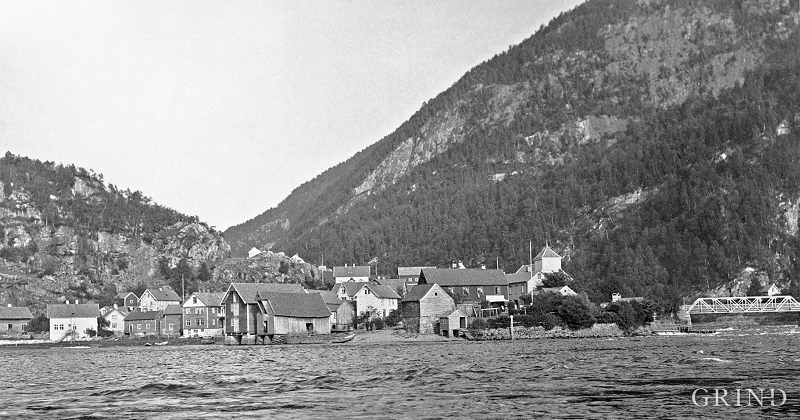 Evanger (from Old Norse ålvangr, “vang”, “voll” (field) where the horses may graze) is the place where the river from Vangsvatnet, the Voss watercourse, runs out into Evangervatnet. From here Teigdalen valley runs to the north, towards Eksingedalen, and from here there is a short distance to Bergsdalen in the south.

The parishes of Evanger included the whole of Vassveri, the community along the main valley from Tysso to Geitle, and Bergsdalen, Rasdalen, Øvstedalen, Teigdalen and upper Eksingedalen – largely corresponding to the former Evanger municipality.

When the railway connection came in 1883, a craft community developed at Evanger, with shoemakers and tailors who made shoes and clothes for a wider market than the local community. The Evanger shoe, a winter shoe, was also sold in England, and the tailor here made uniforms for the railway personnel at the station in Bergen. Evanger and Teigdalen also have long traditions in the production of salted, dried sausage (salami).

In 1923 the centre of Evanger burned to the ground, with only the church left standing. But it was built up again during 1924 and 1925. The harmonic wooden architecture that we encounter here shows a west Norwegian village from the 1920s.

Today the new route for E16 passes in front of Evanger; again the main thoroughfare runs along the old artery between the Voss communities and the town. Many old food traditions have survived in these villages, and old open-hearthed rooms and smoke houses have been preserved for the smoking of meat. Smoke house cured mutton sausage has become its own brand.