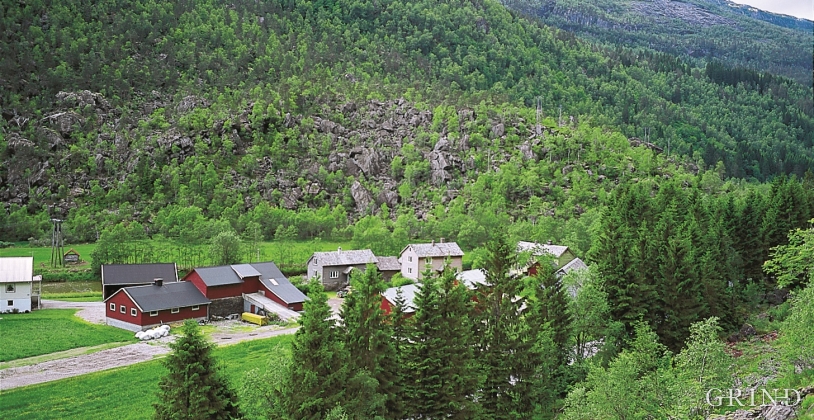 It is not surprising that there are several folk tales connected to the large and unusual scree deposit that is found at Langeland, uppermost in Teigdalen. It is said that folk have been taken into the mountains by these stone blocks and have come back and told about how the wood nymphs live. It is also said that packs of thieves hid here in the old days, both themselves and the treasures they had stolen.

North of Evanger a north-south trending opening in the mountain, Teigdalen, appears in the mountains. The Vossa valley with Vosso at the mouth of Teigdalen carved almost all the way down to sea level; Lake Evangervatnet lies only 10 metres above sea level. This has given Teigdalselvi energy enough to dig down almost as deep. The glaciers at the end of the last ice age moved mainly westward, that is, right across the valley. Therefore it must be the river that has done most of the carving work. The steep valley sides in the deep V-shaped valley are also the reason why there are both larger and smaller avalanches.

The bedrock in Trolluri is granite, which also occurs in the mountains on the west side of the valley. On the east side, however, there is micaceous gneiss. The form of the scree also suggests that they have come from the west. It must have set off as one big avalanche, as in the Hellandsura scree in Modalen.

The avalanche at Langeland released enough energy to send gigantic blocks several hundred cubic metres large all the way out over the flat valley floor. The avalanche deposits are 70 metres high and have a volume of 2-3 million m3. Most of the very big avalanches were probably set off right after the ice age, which ended roughly 11,000 years ago. The steep mountainsides that emerged as the glaciers disappeared were exposed to water, wind and frost. The mountains were thus unstable, with avalanches and rock falls as a consequence.

Trolluri functions as a dam for the Teigdalselvi river, and has forced her over toward the eastern side of the valley. On the upper side of the scree the river has therefore branched and has created islands between gently flowing fishing holes. On the lower side of the scree the river runs back to the west and makes a place for the Langeland farms, with flat grasslands on river plains far down the valley. It should be possible to wander around in the scree deposit. Walking here is like walking in a labyrinth, without seeing daylight.

One of the first passable roads that were built in Hordaland was the road that the farmers participated in building to Evanger, in order to be able to transport fresh milk to Bergen with the new Voss railway in 1883. The driveable road across the mountain to Eksingedalen is of a newer date, but the connection is old. On the summit you get a beautiful view over Teigdalen.