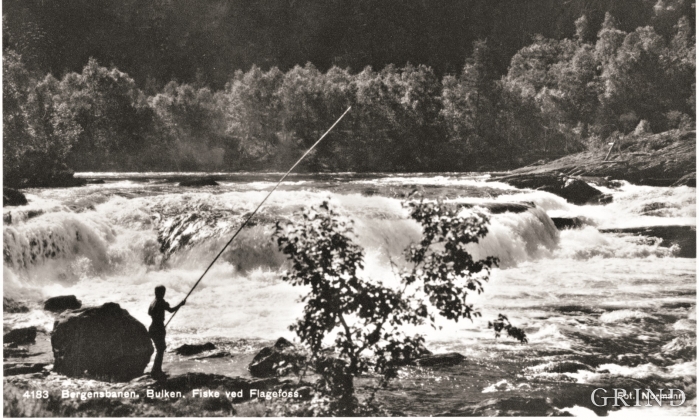 Fishing in Flagafossen in the 1930s. (Normann)

There is probably no bigger salmon to be found in the whole wide world than in Vosso. The average size varies from season to season of course, but for many years this fish has had an average weight of over 10 kilograms. Thumping big ones of 30 kg. have been fished from the river, but one must go back to the 1940s for the last salmon of this size last that was caught.

With catches such as these, it is no wonder that the salmon fishing in Vosso has been a world attraction and given large economic benefits for the landowners along the river and Bolstad Fjord. At the most, foreign investors have paid more than a million kroner for fishing rights.

But as with so many other rivers in western Norway, the return of the salmon has collapsed the past ten years - In Vosso to such a degree that the salmon has been protected since 1991. Salmon lice must take a large part of the blame, even if there are several reasons for their decline. Even though spawn has been set out in the river for a long time, it is completely unknown when the salmon stocks will improve. Sea trout has also been protected in the Vosso, but for this fish, there have been good enough stocks since 1997 to have granted some fishing licences.

The river network has three main branches above Lake Vangsvatnet: the Strandaelvi, Raundalselvi and Bordalselvi rivers. These rivers were protected forever against hydropower in 1986. Vangsvatnet and the stretch of river downstream are not included in the protection area. The salmon comes naturally up the Vosso to the Voss hatchery in the Strandelvi and to Palmafossen in the Raundalselvi river. At Palmafossen a salmon ladder was built in the 1950s, but proof is still lacking that salmon have managed to come by here.

The Vosso river runs through rich agricultural communities, some places also over nutrient rich bedrock. Nonetheless, the water system has been affected by pollution, though not as much as in other rivers. In consideration of the salmon stocks liming has been carried out since 1994 by the power station at Evanger. Why is the salmon in Vosso originally so large? That it comes from a big river is of course important. In addition, the Vosso salmon spends more time in the sea than most other strains of salmon. But why it does that, nobody knows.

Map of the Voss water system. "The Voss is wide, but the Vøre is wider". Vassvøre is the old name for the area from Vangsvatnet lake to Bolstadfjorden.

Fish Lords show off the day's catch at Hotel Monsen, Evanger, in 1912. The scale on the wall is in pounds. (Terje Styve, Voss Folkemuseum VFU-F-01672.)

The Voss hatchery was built in 1989, but previously there were hatcheries in operation in Vosso since the 1920s. In autumn of 1989 the first eggs from the Vosso salmon were prepared for the hatchery. Since that time up toward 100,000 summer-aged salmon about 5 cm in size have been set out in the salmon-carrying stretch of the Voss water system. The annual fishing for brood stock in the protected river, and the sorting of aquaculture fish, have been labour intensive. When the catch of brood stock has been little, it has been necessary to set out eggs of Vosso salmon from the gene bank in Eidfjord in order to produce enough fish stocks for setting out.

Voss Hatchery produces nearly ten thousand spawn from brown trout each year. 5–7 centimetre long summer age spawn have been set out in roughly 60 waterways around the whole municipality. The strongly regulated hydropower waterways, Torfinnsvatnet and Volavatnet, have fine fish stocks today, thanks to these initiatives. It also helps that the larger brown trout were moved from the lakes where fish were abundant, to where there were few.