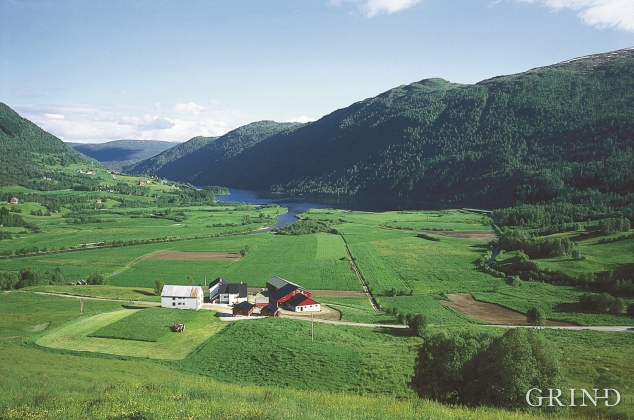 From Skjervheim toward Lake Myrkdalsvatnet. The delta that had built out into the lake, added fertile landmasses that now are easily cultivated farmland. (Svein Nord)

THE WETLANDS THAT WENT AWAY, AND THEN CAME BACK

Mykdal delta had an unusually diverse bird life, right up until 1987. The Myrkdal delta should have been protected, and the plans were prepared. Despite the area's high elevation at 227 m a.s.l., it had a wide variety of bird species compared with other fresh water wetlands in inner Hordaland. Several of the bird species were also unusual for the region. The delta had for example a permanent nesting colony of Eurasian Wigeon, believed to be the only one of its kind in the municipality.

Farming came ahead of conservation, however, and the birds lost the battle over the wetlands, as often happened in western Norway. In 1987 the water level sank 1.4 metres. Floods were reduced, which was the objective. But far from all of the 500,000 km², which were intended recaptured for farming, were shown to be suitable for agriculture. The 1.8 millions of crowns that had been spent on the project, mostly government funds, failed to give the expected return.

Ten years after the water level was lowered, new government funds were laid on the table, this time to repair the damage caused by the first subsidy. New channels were dug, and new islands were built up in order to recreate some of the delta landscape. It could not possibly be just as before, but good enough so that several of the lost bird species returned to the Myrkdal delta.