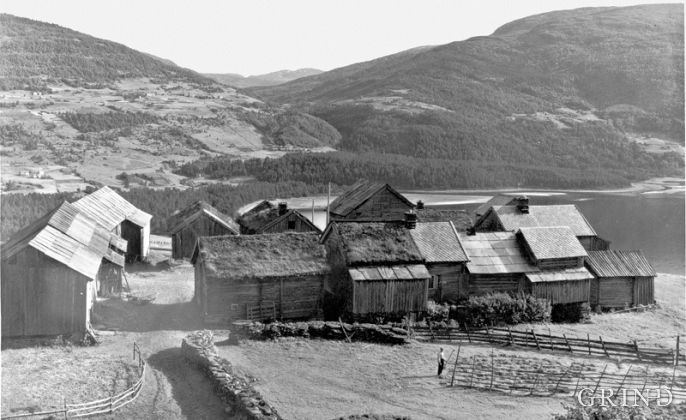 “Above the old Vossevangen lies the old Mølster family farm. It is situated on a hill, as family farms will do. It is as if chance has wanted to make something out of this farm with its wonderful situation. Because it has to be said that it has been something of a coincidence that precisely this farm should have retained its ancient appearance, right up to the present day. To ascend to Mølster is like delving into the past, to meet one’s ancestors. Houses and lofts, storage houses and sauna, cowshed and stable, they stand there with their fairly-tale look, as had we entered an old king’s farm. Not from the times of the sagas, but from a time when the country quietly pulled itself together again. And Mølster lies as a farm full of memories from this time.” This is how the Director for Cultural Heritage in Norway, Harry Fett, described the old hamlet at Mølster when it was opened as a museum in 1928.

The two farms belonged to Botolv Mølster and Arnfinn Ringheim in 1917, when the museum took over the old communal farm hamlet. The buildings make out a square farmyard, and the houses are set in a row, continuous for each farm. The scullery at Botolv’s farm is probably from the 1500s, an old smokehouse with a vent in the roof joined to a newer house from the 1800s. Many traces indicate that there has been an older house on the same site earlier. Close to the scullery there is a small shed. This feature, with the houses facing inwards in a row – scullery, dwelling house and shed – is common in many older farmyards in Voss. This is probably a tradition from the Middle Ages. Furthest out in the farmyard, towards Vangen, there are a loft and storage house on stilts, and facing east there is a hayshed and cowshed. From the farmyard on the upper side there was a stone-built wall to guide the cattle into the grazing fields, a structure that takes us back in time.

Interior from the smokehouse (Egil Korsnes).

Voss Folk Museum is in the rare position in that its collection of historic buildings is represented by three farms standing on their original sites; Mølster, Nesheim and the old vicarage of Oppheim. Already in 1906 the Society for the Preservation of Norwegian Ancient Monuments had taken up the idea of protecting the old farmyard at the Mølster farm from the local historian Lars Kindem. When the agricultural reform started in 1917, Lars Kindem was at the forefront in securing the old buildings through agreements with the two owners – a process of protection many years ahead of its time. In 1927 the owners of Mølster had built new houses and moved out of the old yard, and in 1928 the hamlet was officially opened. Then the collection numbered 4,000; in addition came the Finnesloftet collections. In 1970 the museum took over Nesheimstunet, and in 1976 Oppheim old vicarage in the former Vossestrand municipality. In 1982 the new fireproofed museum building at Mølster was opened.