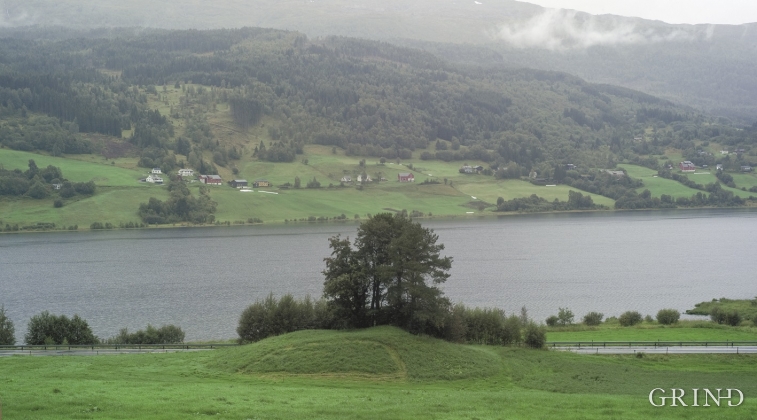 On the farm Bø, close to the highway between Bulken and Voss lies Byrkjehaugen, one of the largest burial mounds in West Norway. Originally it was around 50m across and 5m high, but following the excavation in 1908 and chipping off by both railway and road construction, the cross-section has shrunk to 37m and the height to 4m. All the same, it is an impressive burial monument for the passing traveller to see.

In the mound there were three graves from the time of the migrations. Uppermost there was a stone coffin in which a man was buried. He was lying on a bearskin. Below the coffin there was a layer of burnt remnants from a funeral fire. The cremated corpse was of a woman. She had been dressed in her finest clothes and wrapped in bearskin before being cremated. At the bottom of the mound there was still another burial mound containing a woman. Here parts of the skeleton were preserved and scraps of skin, textiles and clothes were found.

There is little difference in time between the first and the last grave. In all three were found earthenware jars, which were so similar in form and decoration that it is believed they must have belonged to the same family. And this is how the finds from Byrkjehaugen have been interpreted – as a family grave for the occupiers of Bø in the last half of the 6th century.

The impressive burial monument bears witness to wealth and power far beyond the ordinary. And the name BØ shows that here we are dealing with one of the oldest farms in Voss. The origin goes far back in time, probably a long time before the birth of Christ.