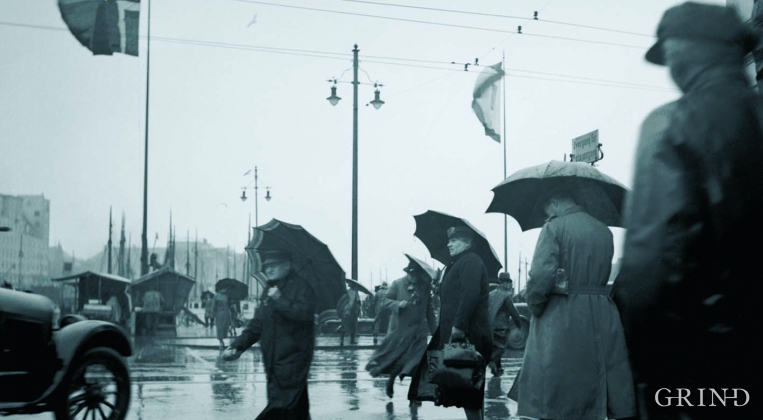 "With its strange situation (surrounded by high mountains), this city has the advantage of a beautiful port and considerable shipping, but also the disadvantage that once on land one cannot get to the city without great inconvenience. This is because the weather in the vicinity of these high mountains is extremely unpleasant and rainy. There has even evolved an expression that is always rains in Bergen, and we have not experienced anything to counteract this saying." (a quote by the Dutch professor Fabricius after a visit to Bergen in ca. 1780).

Bergen folk will happily talk about the weather. They get a lot of it, and there are a lot of surprises. Meteorologists strive to predict what tomorrow's weather will be, and they hear about it when they get it wrong. Wet or dry - umbrellas are always nearby. Bergen is the first city in the world to install an "umbrella dispensing machine".

Bergen's weather is dominated by the air masses that come in from the west. The frequent low pressures from the ocean give much wind, as well as rapid changes in the weather. The low pressures bring with them a dense cloud cover and rain over large areas. The showers can be over quickly, but are often intense. Yet, they can just as well last a long time, also.

According to measurements at Fredriksberg, there are on average 232 days with rainfall each year, that is, days with over 0.1 mm precipitation. Then, there are 133 days without rain. This statistic feels wetter than it is in reality, however. During the course of a year, we can also expect that there will be on average 188 days with more than an hour of sunshine. Even though there may be a shower or two, the sun will shine in between. Recalculated according to this kind of Bergen-consolation, there are at least twenty days with sunshine every month from April to August - on average.

Because of the high mountains, the number of hours with sunshine daily will vary a bit between the different parts of the city, especially in winter. For the central areas of the city, the number of hours with sunshine on a clear day will vary from about 3 hours in January, to about 16 hours in June. Normally, there are least clouds from spring until the middle of June. Then, there is usually a change in the weather; more clouds and rain. Bergen nonetheless gets a good deal of summer sun, also. The mixture of rain and sun makes Bergen one of the most exuberant cities in the country. In winter, the air masses from the west give a relatively high temperature. Florida is the weather station in the country that has the next highest average rainfall; taking the year as a whole, 7.6 oC, just a tiny tenth of a degree behind Skudeneshavn.

Usually it is driest in April and May. Then, the amount of rainfall increases until around September, which normally is the wettest month of the year, with 283 mm. Annually, an average total rainfall of about 2250 mm will fall, measured at the Florida station. For the districts outside of the central areas, there can be a bit of variation in the amount of precipitation. This will give 10-15% higher values in the hillsides up toward Fløyfjellet and in toward Årstad, and 10-20% lower values out over Sandviken toward Eidsvågsneset. In Fana the annual amount of rainfall is somewhat less than in the city centre, while there is a sharp increase again up toward Gullfjellet, which normally gets over 3000 mm.

Because of relatively much wind and unsettled weather, the temperature conditions do not usually vary much. But, in still and clear weather, there can be large contrasts, especially in winter. Then, there may be an inversion: coldest down in the city, and relatively warmer higher up. On such days it can be 10 degrees below zero in the Minde–Hop-area, while the top of Ulriken might have just a few degrees below.

Average number of days with and without rainfall, and average monthly rainfall in Bergen. (Endre Skaar/Eva Bjørseth)

Distribution of solar radiation in the Bergen area in winter (left) and summer (right). The yellow colour indicates high levels of solar radiation, blue colour low levels of radiation. The waters to the left are By Fjord and Store Lungegårdsvannet, to the right is Haukelandsvatnet. The Ulriken massif is in the centre of the map.

City air can do one good, but on still winter days in fine weather, the air in Bergen can be injurious to your health. Air pollution is the existence of undesirable smells, harmful particles and gasses. The sources of pollution in cities will for the most part be connected to human activity. It can come from emissions to the air from different types of transport, emissions from different types of heating elements and emissions from large and small industries.

When winter studded tyres wear down the asphalt, swirls of dust are thrown into the air. The small particles, those that are less than 2.5 thousandths of a millimetre, can remain in suspension for hours and days, depending on the weather conditions. Suspended dust is also produced by the wearing down of tyres and brake shoes. In addition, soot, sulphur compounds, cement dust and burning of diesel all increase pollution.

In Bergen, there has been a considerable reduction in the use of winter studs during recent years, but the number of cars on the road has increased during the same period. On cold, still winter days, therefore, the amount of dust in the air may still be high enough to make walking along the streets in the busiest areasof the city a health risk.