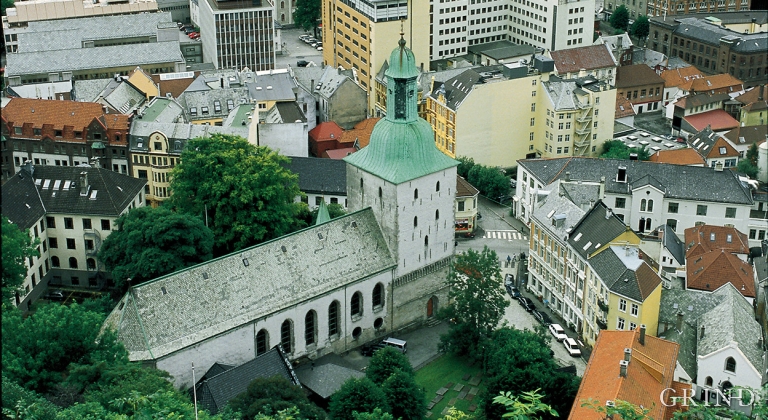 The oldest part of the Cathedral’s western wall comes from a parish church - Olavskirken in Vågsbotn – built already in the 1100s. Around the middle of the 1200s the church was taken over by the Franciscans, who extended it and built their monastery on the south side. The church’s chancel with its three-part chancel conclusion was built around 1270 and 1300. In this chancel king Magnus Lagabøte was buried. The western portal of the steeple base, and the splendid tracery windows from the 1270s provide evidence that English craftsmen, or Norwegians trained in the English building tradition, have worked on the church.

The church became a cathedral after the Reformation in 1537. The bishop moved into the monastery and transformed it into a bishop’s estate. Around the year 1600 a side nave was added to the church on the south side. Around the same time the present steeple was erected above the western part of the old long church.

The church has burned several times, both during the Middle Ages and after the Reformation. After the great town fire in 1702 it was radically reconstructed. A new side nave was added with an arcade towards the main nave, and the vaults in the chancels were pulled down. In 1880-1883 the church was restored and given its present Neo-Gothic interior.