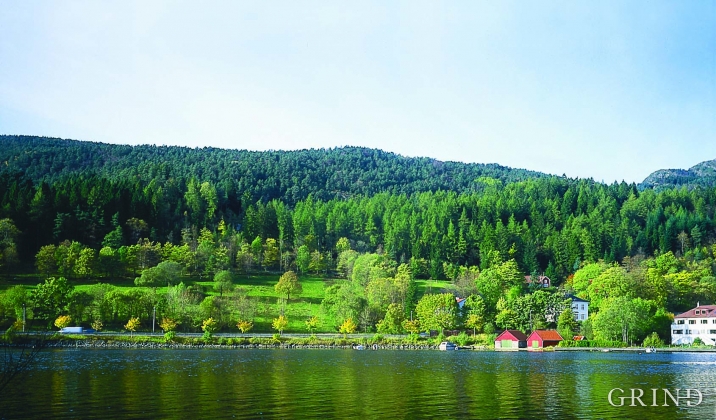 Under this green field the unique interglacial layers lie hidden. The area is now protected, a kind of natural archive that researchers some time in the future again can study. (Svein Nord)

Fjøsanger is known among ice age researchers from around the world. Under an excavation in 1975-77, geologists from the University of Bergen found layers from the last interglacial, ca. 115 000 to 130 000 years old.

The layers contained thousands of animal- and plant remains that tell of an exuberant nature and a warmer climate in western Norway in the past than it has today. This was the first find from this Interglacial Period in Norway. The reason that such layers are so rare is that the glacier usually removes all loose sediment deposits during the ice ages. The Fjøsanger locality was discovered in 1968. Then, there were discoveries of seal bone, shell and plant remains in moraine soils that were exposed during road clearings along Straumevegen, just above the Fana rowing club. These were fossils that the glacier had scraped up and mixed together in the moraine. Drilling gave hope of finding an undisturbed interglacial layer hidden under the moraine, and the excavations confirmed this completely.

What the layers showed

At the bottom of the more than 10 metre-deep excavation, one met solid rock, covered by a moraine (layer P in the diagram) from the next to last ice age. Over the moraine there was a layer of silt (coarse-grained clay) (layers N and M) that had been deposited on the sea floor just after the glacier had receded. The silt is full of Iceland scallop, which today is most common from Tromsø north to Svalbard (Spitzbergen). Pollen analysis show that there were only grass and herbs on land, plants that we find today in the high mountains. It was cold, just as one would expect during an ice age. Birch migrated in just after this. Upwards in the first sand layer (layer L), we see a continued improvement in the climate, where periwinkles and horse mussel were just as abundant as today, while pollen samples show that oak trees were on the increase. During the warmest part of the interglacial (layers K, J and I) there was nearly only oak and hazel forests in the Bergen valley. This means also that pine and birch crept more than 300 metres higher up the mountainside, compared with today's treeline. In the sea, oysters and scallops were common. There were even finds of shells and calcareous algae that today do not live north of the English Channel. Toward the end of the interglacial, spruce migrated in and formed dense, dark forests.

In contrast with the planted spruce provinces we see around western Norway during our own interglacial, this earlier spruce reached all the way to Bergen without any help.

At the beginning of the last ice age, the glacier deposited 3 metres of glacial debris at Fjøsanger (layer G). The stones in this layer suggest that the ice came out from the Arna valley and calved in Lake Nordåsvatnet. The water became greyish green from the glacial debris, such as we see in the water in front of glaciers today. But, this glacier never managed to cross Lake Nordåsvatnet and reach all the way to Fjøsanger. Over the glacial debris, a layer of beach gravel was laid down (layer F) containing a richer animal life that showed that the climate was milder. Discoveries in Sweden show that nearly the whole of Scandinavia was ice-free at this time. Just on top of the beach gravel comes the Bønes moraine (layer B), which is evidence that the glacier finally went over Fjøsanger. It would take about 25 000 years of the last ice age before the inland ice would grow so much that Bergen would be run over by the glacier.