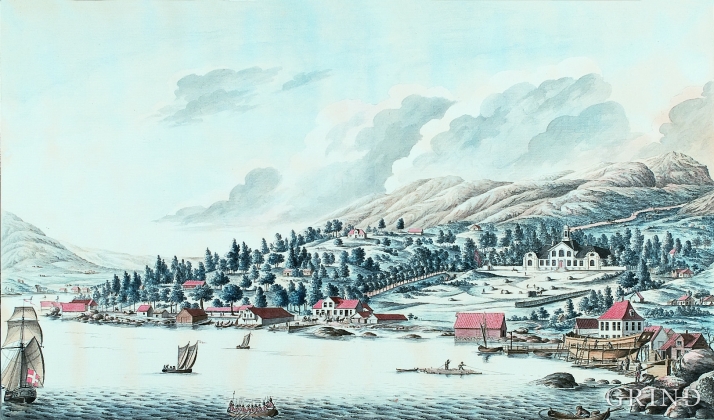 As a fairytale castle Damsgård Hovedgård lies on the slope rising up from the Puddefjord. The old connection between the farm and the sea, as we see it on Dreier’s prospectus from 1810, has been broken up by roads and encroachments in the building mass. But the main building itself is a central monument in Norwegian architecture from the 1700s – one of the finest representatives for the rococo period, with a magnificent and rich décor both in its interior and exterior.

Parts of the main house probably stems from early 1700s. At that time the farm was rebuilt for the Manager General of Customs J.C.Geelmeuyden and was given the elaborate façade and wing around the courtyard. The rooms were decorated with luxuriant equipment in wallpaper and painted décor. Damsgård was both a recreational place and a leisure place, and at the same time a crop farm, that is an aristocratic estate. Geelmeuyden was ennobled to Gyldenkrantz in 1783.

In 1787 Damsgård was bought by court agent and merchant Herman Didrich Janson. He modernised some of the rooms in the style of Louis XI and continued to use Damsgård for recreation and leisure. The house gathered the Bergen elite for political discussions and large parties. From around 1870 Damsgård became a permanent residence for the Janson family.

The old word “Villa” covered both the house and the garden arrangement surrounding it. The individual areas were to make out a harmonic entity. The original garden at Damsgård was established in the 1780s. While the East Garden is a reconstruction of the baroque garden arrangement already there, most of the West Garden is a restoration with a duck-pond and a carp-pond. Many of the old lopped linden and elm trees are from the origins of the garden, while most of the shrubs and perennials have been planted. The individual types of plants, as well as the carp in the pond, are of the good old type that were there in the beginning. The garden is of considerable interest both nationally and internationally.

In 1983 Damsgård was taken over by the State, Bergen Municipality and Hordaland County Municipality. Vestlandske Kunstindustrimuseum has assumed responsibility for the property as a museum.