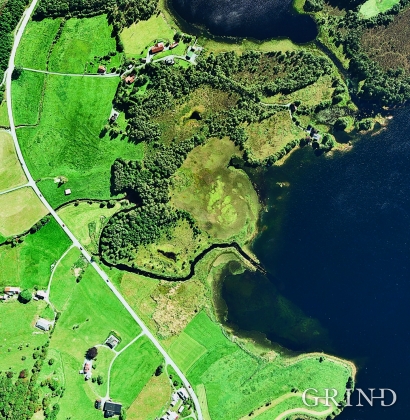 Kalandsvika Bay in the eastern part of Kalandsvatnet. The birding tower can be seen at the right lower edge of the picture (parking on the other side of the road at the Bontveit intersection). (Blom Norkart Mapping)

There is little to say about the opportunity for surveying from the bird observation tower in Kalandsvika: 155 different bird species have been sighted in the Kalands water shed. Take your binoculars and visit the tower in late spring - early summer or during the winter half of the year. If you are lucky, you might get to see a rare bird species.

Kalandsvika is the best place in Hordaland to see the Sedge Warbler. On a good evening in early June, you can hear more than 10 singing males. The Sedge Warbler's song posts are usually spirea bushes and willow thickets, as well as the special vegetation of the canary grass and great bulrush by the river mouth. These are also the places where you are likely to see the Reed Bunting. On a late evening in May and June you will in addition be able to hear many other bird sounds: the Snipe's bleating flight play, the Redshank 's noisy warning calls, the Lapwing's hot-tempered diatribe against the crows and one or another Whinchat trying to imitate all of the other birds in their song.

Some periods in winter, there are nearly 40 song swans in the bay, swans that alternate between the Os- and Kalands-water systems for their choice of gathering place. Every winter, about 20-30 Goosanders come to the waters of Lake Kalandsvatnet; there is no place in the county where you will see more. The Goldeneye and Tufted Duck are also common. One seldom sees Little Grebes or Smew, but they are just as regular winter guests.

Water hemlock was the explanation that was given when the little boys and girls in Fana got seriously ill after eating what they had thought was ordinary hemlock. In the 1960s attempts were made to eradicate this poisonous plant in Fana, but to no avail.

Water hemlock is one of the most poisonous plants in the country, and it is life threatening for whoever eats even a small bit of the plant. It is also quite dangerous to cows and sheep, while goats and pigs seem to tolerate it. With their small white flowers and divided leaves, they resemble woodland angelica and other umbellifers. In contrast to the other poisonous plants, the water hemlock does not have a particularly bad taste. Its root resembles the outer part of celeriac and turnip . But, a cross section through its root reveals what one is dealing with: the water hemlock's root is clearly divided, with several compartments. None of the other umbillifers have such compartments within their roots.

Water hemlock grows in very moist places where it is not natural to walk, neither for folk nor animals. It stands often a little ways out of the water, among the other umbillifers, in nutrient-rich soil. Water hemlock is rare here in Norway, but in Fana one finds quite a lot of it. By the edge of Kalandsvatnet, Iglavatnet and Apeltunvatnet, and by many small tarns in this part of Bergen, it is quite common.