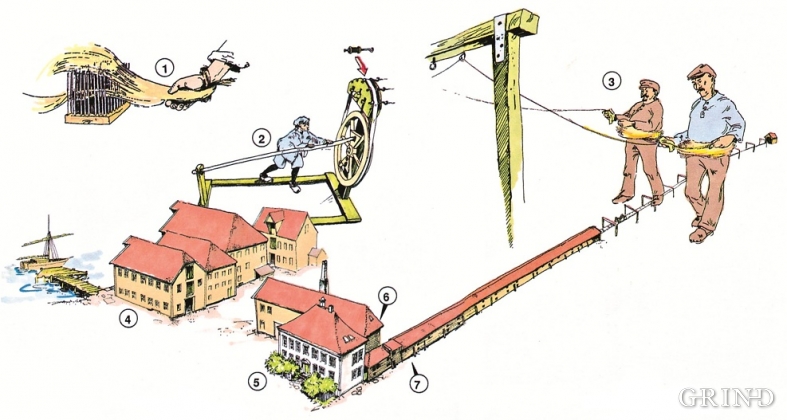 Close to the tunnel opening at Amalie Skrams vei in Ssandviken, there is a cultural monument of European dimensions; a rope making works that produced rope and fishing tackle for West and North Norway.

The long, narrow Reperbanen (the rope walk) was the very centre of the working process. Here the yarns of hemp were spun and later spliced to make all sorts of rope for ships and boats. The building which we see today may be dated to around 1690, and is therefore the oldest rope walk in Europe. The irregularities on the roof and futtocks along the sides are clear signs of ageing. The entire works is a remnant from the time when Sandviken was dominated by dozens of such craftworks. Bergen was Norway’s most important centre of production for rope and Sandviken’s rope walk is an important cultural monument from this industry.

At the end of the rope walk is the rope works manager’s residence and office – one of Bergen’s most distinguished bourgeois houses from the beginning of the 1800s. The original house was built between 1806 and1808 by rope master Christopher stoltz. In this house the rope master lived with his large family and some of the apprentices and novices who worked in the rope-works. Bergen Rope-makers Guild, the only one in Norway, often had its meetings there.

Behind the building there is a tar-house built in stone. Here the rope was pulled through heated tar to give it extra protection against moisture. Belonging to the works was also a large boathouse for storage of the raw material – hemp – that was imported from Russia.

For more than 300 years Sandviken was a dynamic suburb of Bergen. It started with the milling industry, Storemøllen and Småmøllen in Gunlaelven (Munkebotn) and Muleelven. From the middle of the 1600s Bergen merchants started building boathouses in Skuteviken and Sandviken. The entire sea front and parts of the sea foundation were gradually packed with storehouses as storage rooms for fish and fish products. They often contained richly decorated rooms; “summer rooms” where the owner and his family could spend the summer. Many of the stores are now gone, but there are a few still standing. Most of these are now protected, or subject to protection.

From the last half of the 18th century a number of other activities were also established; various types of crafts, which often gradually turned into minor industries, guesthouses for the crews on the sailing ships waiting for goods, shipyards, rope-works and merchants’ houses. Thus Sandviken attained its own population with its own communities in the typical “grender”. Several of these “grender” are still preserved, though now quite enclosed by other buildings. At the same time the merchants moved out of their summer rooms in the stores and built separate summer houses for leisure use and entertaining. Of these some have also been preserved, some have been moved to Gamle Bergen Museum. We should also remember that Sandviken all along had a certain amount of agriculture, by and by managed by the leaseholders of the summerhouses.

Up to the inclusion into Bergen municipality in the 1870s Sandviken lived to a large extent its own life, with communities for craftsmen and workers, work places in boathouses and craft industries, a certain amount of small trading, guesthouses and other “service industry” – and with the upper classes in their leisure houses.