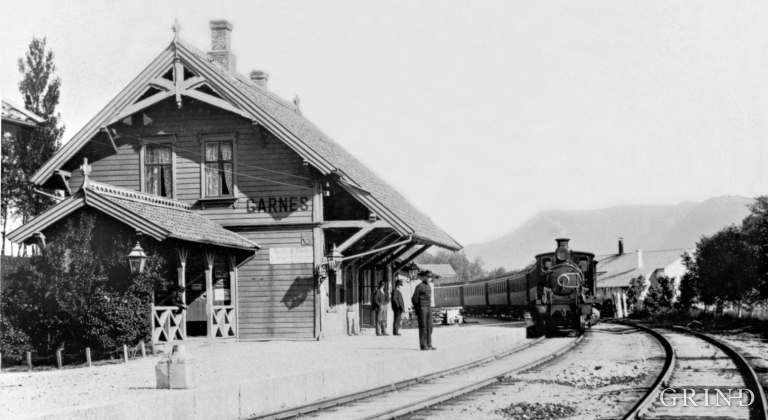 From the opening of the Vossa railroad, Garnes Station was also the end destination for the local traffic to Bergen. The station was therefore built with locomotive garage, wagon hall, turntable and goods store. Garnes is an example of an intact railway station from the 1930s. The locomotive hall was built in 1904, the wagon hall in 1881 from the drawings of Balthazar Lange, and a new station building was built in 1919 after the first one had burnt down. Norsk Jernbaneklubb’s division in Bergen has restored the station complex and are working on establishing a veteran line between Garnes and Nesttun station.

The postal road to Christiania

The fixed postal routes that the governor Hannibak Sehested created in 1647, at the command of the monarch, were established along old and well established roads between the parts of the country dating from medieval times and prehistoric time. The road from Bergen to the east of Norway passed across Borgarskaret to Borge and Lone in Arna, then continued via Tunes and into the Sørfjord with boat to Dalebryggja and Dale, then into Bolstadfjorden and to Voss, where it continued to Gudvangen and Lærdal. This was the general road, or “tjodveg” as it was called in the Gulating laws, even before the year 1000. The road is one of the oldest out of Bergen, and we find it mentioned in the saga literature. In Eirspennil it says that in 1206 Håkon Jarl fled from town as soon as he heard that the “baglarane ” were on their way north. “He fled up by Borgaskardet and down to Osterfjorden, and then north by Raudafjell”.

Between 1780 and 1804 the postal roads were rebuilt to be drivable, under the management of Jens Schanche and Road-master General Georg Von Krogh. The road across Borgaskaret became too difficult and in 1783 the postal road to Christiania was routed via Natland, Grimo and Langedalen to Indre Arna and Tunes. But right up to the opening of the Voss railway in 1883, the farmers carried milk and other goods on their backs across Borgaskaret to Bergen.

In the 1780s the postal connection between Bergen and Stavanger was re-established; it had been out of operation since 1690. The road southwards parted from the Christiania road at Midttun – the stone bridge still stands – and passed on to Kyrkjebyrkjeland and Sandven to Hatvik. These farms were also post farms and transport changing stations. In 1648 there was also a law passed on transport changing stations and guesthouse places, and in many places these corresponded with the postal routes.