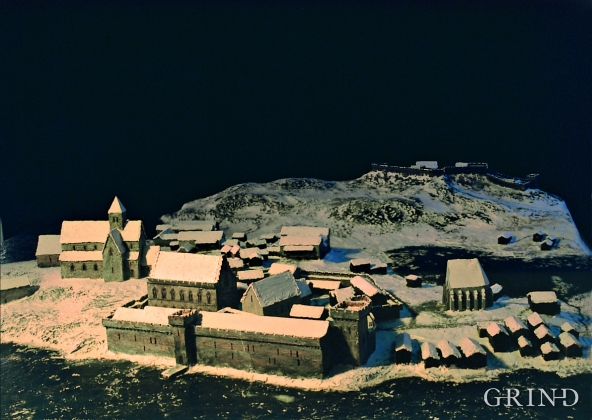 FROM CASTLE TO FORTIFICATION

The person in charge of the demolition of the church edifices on the king’s medieval estate was the castle officer Eske Bille. An attack was anticipated from the fugitive king Christian II. An attacker could take possession of these structures outside the walls and fire on the castle from there. Besides Christian II’s castle officer the bourgeois Jørgen Hanssøn “recorder”, the one who had most forcefully contributed to the modernisation of the castle in 1514-23. Sverresborg had been pulled down in 1477 by the German merchants on “Bryggen”.

After a visit to Bergen in 1641 king Christian IV affirmed that the fortifications needed improving. During the Hannibal feud in 1644-45, Bergenhus was surrounded by earthen ramparts with batteries and palisade facing Vågen. In 1646 the king sent his Dutch fortification expert, Isav Van Geelkerck to Bergen. The work was continued after the introduction of autocracy under the auspices of another fortification expert of the times, Jean Caspar Von Cicignon, who became the next military commander at Bergenhus in 1664.

“Langhuset” (the long house) and “Tårnet” (the tower) underwent changes in function and exterior. Bergenhus became a modern baroque fortification, surrounded by a star-shaped system of ramparts and bastions. The somewhat accidental late medieval building complex around the Palace estate was replaced by new castle-like buildings of a Danish baroque type during the 1700s, the Commander’s residence and the Captain’s gatekeeper’s residence. A more distinct division between an interior castle area and an exterior fortification part, as at Akershus castle, became evident. This is less evident after a considerable part of the fortification’s outer works was removed in connection with the construction of “Festningskaien” (the castle harbour) in the 1920s.

After the Napoleonic wars Bergenhus has not been militarily equipped as a fortification, but maintained as a military administration centre. Håkonshallen and the Rosenkrantz tower have status as national monuments. The main gate and the guardhouse on the parade ground were built during the reign of king Carl Johan. The entire installation has been restored after the extensive damage inflicted during the war in 1944.

In medieval times Veisan was the name of the boggy swamp where Koengen lies now. Up to 7-800 this was still a sheltered bay inside of Vågen, which was gradually filled in.

The king's estate at Holmen

In the first quarter of the 12th century king Øystein Magnusson moved the royal residence from Alrekstad to Holmen furthest out on the east side of Vågen, where Bergenhus fortification is now situated. Here he built a royal chapel – the first Apostolic church – and a large wooden hall connected with the church by an external passageway. This was however not the first royal building activity in the area. Already late in the year 1000 Olav Kyrre started building the cathedral; the large Kristkirken (Christ’s church) and he completed the small Kristkirken. The establishment of the Episcopal residence at Holmen – formally from 1170 – must have entailed further building activity. In 1207 the “baglers” burned the wooden buildings on the king’s estate, including Øystein’s hall. King Inge Bårdsson ensured it was rebuilt.

Bergenhus. Section of a town prospectus from around 1740.