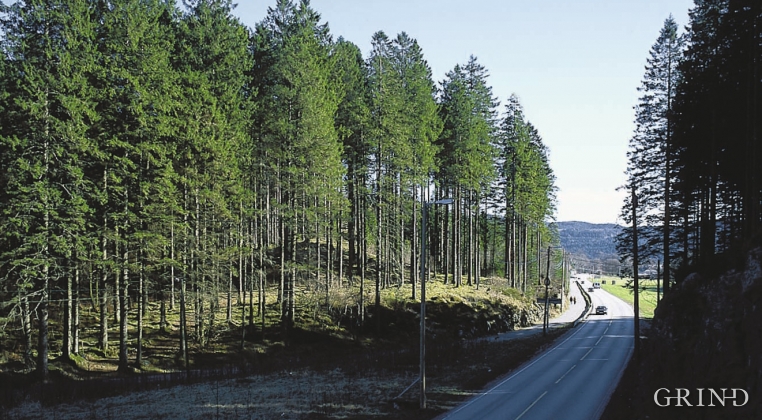 "...it would not be of any particular economical interest to support the planting of forest as the forest that can be cultivated will leave much to be desired in the way of growth potential." These words stem from the economist that at the end of the 1800s was sent to Stend to inspect the planned reforestation in person. The pioneer G.A.Wilson put the economist's words to shame. The spruce that was planted in Rådalen in the period 1867–1869 became a landmark. No other stand of forest in Scandinavia can boast more trees per unit area.

East of the highway, ca. 200 metres south of the entryway to Fana Stein og Gjenvinning ("Fana Stone and Recycling"), we find the forest that stems from one of the first spruce plantings in the country. 150 years ago, this was an area with a lot of heather moor after a long time of grazing by sheep and goat. G.A.Wilson, who was the first manager at Amtlandbruks school on the Stend farm, started planting in the outlying areas on Stendaholmen in Fana Fjord (1867) and in Rådalen (1867–1869). In the beginning it was exploited as imported spruce- and pine plants, with spruce seeds probably from the Harz Mountains in Germany. After some trying and failing, for example with the timing of planting, bush pine and spruce were planted in rows. The planting was successful. It quickly became clear that the spruce developed into extremely good-looking logging forests, with excellent growth, good quality timber and no health problems. The biggest planting activity was during the period from about 1910 to 1918, but already from the First World War, most of the Stend Farm was covered in forest.

Spruce forest in Rådalen has been regularly tended with thinning, so that the tree crowns and roots have gotten plenty of room to grow. Even though the planted fields are quite exposed to wind, only a few trees have ever been blown over. Even the storms of 1949 and 1994 did little damage. At the time when the garbage dump was situated in Rådalen, the crowns of the trees were a favourite gathering place for crows and ravens. Many of the fragile top shoots got damaged, and the height that the trees reached was somewhat reduced. Some of the giant spruce have long tears in their bark as a result of lightning strike - their height makes them into effective lightning rods.

The fields of spruce in Rådalen from the 1860s give interesting information about how the planted forest will look if it was able to develop over the course of a 100 years. Many are surprised to see that the dense and dark planted area gradually become transformed into more light and open forests, with moss, ferns, heather, herbs and bushes. Growth in the old spruce fields has been shown to continue for quite a long time. If the field is representative of how spruce forest can develop, this signals that most of the planted spruce fields in Hordaland can be cut long before the trees are full grown. The usual harvesting age now is 60-80 years.

Facts about the planted spruce fields: (data from 2001).