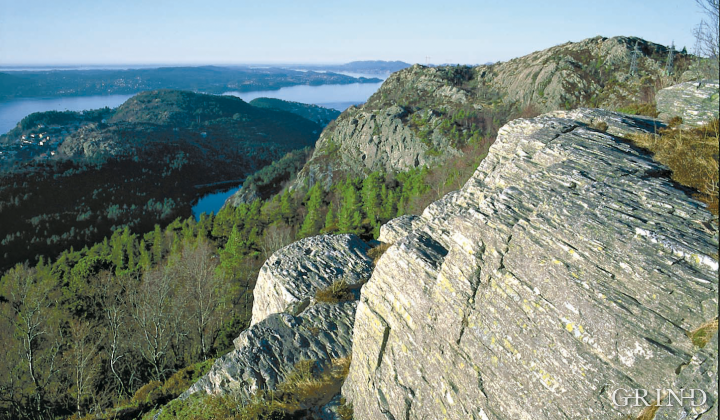 From the mountainous rocks just below Sandvikshytte cabin on Sandviksfjellet. Stretched conglomerate in the rocky outcrops in the foreground. (Svein Nord)

On Sandviksfjellet there are old boulders that have been made into mountains. The stones have been stretched out or squeezed together between huge slabs of rock, during slow, but powerfulprocesses of transport. This conglomerate shows, in quite a special way, the enormous powers that were active during the collision between Norway and Greenland over 400 million years ago.

The city mountains consist for the most part of ancient (Precambrian) basement gneisses, formed deep down in the earth's crust. These basement rock types came up to the earth's surface some time toward the end of the Earth's Precambrian Era. Rivers deposited layers of pebbles and sand over the gneisses. Since then, the basement rocks, sand and pebble layers have gone through the Caledonian continental collision. The Precambrian basement rocks and the other deposits all got pressed down to great depths during the collision. Sand got transformed to quartzite and quartz schists, while the pebble layers were transformed into conglomerates. During this process, large blocks of basement (the gneisses) got broken loose. The deposits got squeezed flat between these broken off blocks.

In this way the originally round pebbles got flattened like pancakes or stretched until they were long like pointy sticks or giant cigars. Such transformations occur at great depths and temperatures of over 300–350 °C. Then, the rocks behave like a viscous mass. This process takes several millions of years. If similar forces were at work higher up in the crust, the rocks would be crushed or broken up by faults or fractures.

We find quartzite and conglomerate in three zones in the mountain east of Bergen. The biggest zone stretches from Eidsvåg, past Brushytten and Svartediket, to the north side of Ullriken.

The stones in this conglomerate have been stretched and have taken on the form of "giant cigars". (Haakon Fossen)

The stones in the conglomerate have kept much of their original shapes. (Haakon Fossen)

Stone and gravel, for example on a beach or in a river bed, can be transformed to the rock type conglomerate. The condition must be met, that the original deposits get buried sufficiently deeply under the new layers, such that they turn into stone.

From Os in the south to Lindås in the north, one sees a distinctive bowed landscape form, with Løvstakken as a kind of centre. One must of course go up in an airplane or study a map in order to get the overview that is needed to see these aspects of the landscape. But, the Bergen arcs are a known geological concept - arcs in plural, because there are several arced geological units that contribute to the formation of the arc shape.

The Bergen arcs are delineated by valleys and the orientation of the fjords. In the Os municipality and the southwesterly parts of the Bergen municipality, they stretch toward the east and northeast (Grimstad Fjord, Fana Fjord, Hauglandsdalen valley, Hegglandsdalen valley), then they stretch directly to the north between Løvstakken and Samnanger, and then continue toward the northwest over Osterøy, Lindåshalvøya, Radøy, Austrheim, Meland and easternmost Askøy Island.

The bedrock has steered the creation of the characteristic arc structure. Softer and harder rock types lie side by side, and this has caused an uneven weathering of the landscape. The outermost arc is the Store Bergensbue ("Big Bergen Arc"), that stretches from southwest in Os municipality over Samnanger and Osterøy, where it gets markedly thinner, and then on to Bjørsvik and out Fens Fjord. It consists of nearly 500 million year-old oceanic crust and a bit younger layer of conglomerate, marble and schist. In the Big Bergen Arc one also finds mica schist and relatively thin flakes of Precambrian basement gneisses that got broken loose from the basement proper during the Caledonian collision with Greenland just over 400 million years ago.

Innermost one finds Lille Bergensbue ("Little Bergen Arc") that curves from Grimstad, around Løvstakken and further north to Ask and Herdle Fjord. The rock types here are quite similar to those we find in the Big Bergen Arc. Both arcs have in common that they consist largely of Cambro-Silurian rock types, some of which weather easily. The area along these arcs therefore gives a good quality soil. The easily weathering bedrock is also one of the reasons that the landscape is characterized by elongated valleys, fjords and lakes, for example, Bergensdalen Valley from Bergen to Lake Nordåsvatnet, Samnanger Fjord and Fusa Fjord, and the many lakes and sounds on the island of Radøy and the Lindåshalvøya peninsula.

Between Little and Big Bergen Arcs one finds gneissic Precambrian rocks, which probably have been thrust up on top of the Cambro-Silurian rocks by strong forces during the creation of the Caledonian mountain chain. Here, we find unusual rock types, such as anorthosite and mangerite, but also more common gneisses. One zone of granitic gneisses, the Ulrikens gneiss complex, stretches over Ulriken and northwards past Rundamanen and the Sandviksfjellet mountains, whereas the anorthositic unit further to the east is called the Lindås Nappe.

We do not know the details of the creation of the Bergen Arcs, but we know that it is a structure that was formed late during the formation of the Caledonian mountain chain. The structrue of the Bergen Arcs is therefore quite old, at least 400 million years, but it is the weathering and erosion caused by rivers and glaciers during the past millions of years that are directly responsible for the furrows in the landscape.

Examples of crystals formed in cracks and fractures in the Bergen arcs: stilbite from Skuggestranda and prenite from Ytre Arna (Outer Arna). The crystals are exhibited in the Bergen Museum, in the Natural History collections. (Svein Skare)

By Verftet at Nordnes we can see some of the bedrock's "doodles" on a cross-section of the surface. The rock actually can be sawed, if one has a diamond saw of the right kind. This section shows folds that were formed at the same time as the bedrock in the "Little Bergen acrs" got pressed together and run over by the overlying rock masses during the building of the Caledonian mountain chain. (Haakon Fossen)

It was the news headlines in the 1990s: about risks for cancer, closed nursery schools and dangerous air, that gave most people a respect for radon gas. This inert radioactive gas is actually quite rare, but it is formed and released in small doses from most types of bedrock. Granites and granitic gneisses are probably the bedrock types in our area that give off the most radon.

When radon is first formed, it is very difficult for the gas to bond with other matter. It can therefore be released from the bedrock into the air, or be transported in the groundwater. It is believed that radon gas follows fissures in the mountainside on its way to the surface. It is when the atoms of radon get trapped and concentrated in tightly constructed houses, that they can become dangerous. If one is exposed to small doses over long periods of time, the radioactive emissions can be dangerous to health. Measurements suggest that the granite gneisses in the Bønes-Fyllingsdals area and the Korsnes granite give off the most radon gas in the Bergen area. The granitic gneisses in the Biskopshavn-Eidsvåg area also appear to emit a fair amount of radon. In the majority of cases, such problems can be resolved by cementing a good seal over the bedrock or improving the ventilation in the cellar.

The inert gas radon is emitted during the splitting of radium, as a part of the natural break-down process of radioactive uranium to stable lead. Most types of bedrock contain a little uranium, bound in minerals such as apatite, zircon and titanite.