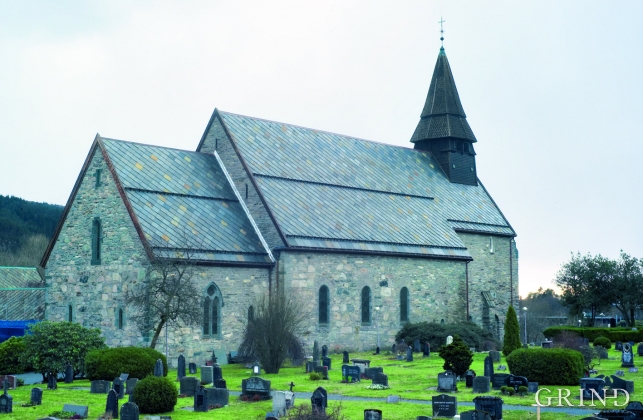 In the Middle Ages the stone church in Fana was a place for pilgrimage, containing a miraculous silver crucifix that could heal the sick. A hill to the west of the church is still called Krykkjehaugen (the crutch hill); according to belief this is where the sick threw away their crutches. Perhaps this church, lying where it does at the old half county boundary , also held a special position in relation to the district churches in the county.

The first mention of the church at Fana in written sources is in 1228, but the rounded portal in the south wall of the nave and the lower part of the wall indicate that the church may be older. The Fana church was in medieval times linked to a hospital, maybe it was this function that gave it its reputation as a place of pilgrimage. In 1303 this church was one of the 14 chapels belonging to Håkon V Magnusson. This is when the chancel probably got its two large gothic tracery windows. The church is also supposed to have had a western steeple in the Middle Ages, but following a fire in 1644 a new steeple, formed as a dome, was erected above the western gable. In 1870 the church was reconstructed. The nave was extended to the west and had four large windows put in at both longitudinal walls. The chancel was made higher; to the west a church vestibule was built in brick with a wooden steeple above. In 1926-27 the church was restored. The nave was now given three smaller windows in each longitudinal wall. To the west the architect Frederik Konow Lund built a steeple base modelled on Voss church, and put on a ridge turret of the same type as was there before 1870. The miraculous crucifix is believed to have been removed from the church around 1620 by the officer at Bergenhus, Thord Roed.

In the area around Fana church there have been several large burial mounds from pre-Christian times. Today there is only one remaining; in the field on the road to the forest research station. Originally the mound was round with a diameter of approximately 18 metres; today it is oval and smaller. In older times there were an additional two mounds. On one of them there were four metres high memorial stones that were removed in 1762. The farmers called them “Giant swords”, and according to convention they marked the ancient half county boundary between Nordhordland and Sunnhordland.