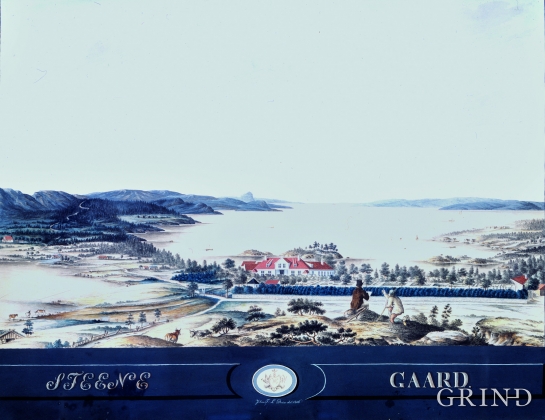 In medieval times the farm Stend belonged to Nonneseter monastery. After the Reformation, it came into the ownership of Vincents Lunge up to 1680. The Customs Manager General, Hans Christophersøn Hiorth, then took over the property. Hiorth was ennobled in 1682, and Stend obtained the status of noble estate. The elegant main building probably obtained its form in Hiorth’s time as a senior state official.

Stend has had many owners through the centuries. Chancellery representative Wollert Dankertsen took over the farm in 1741, and Court Agent Wollert Krohn in 1782. He ran it as a model farm and built a road from Nordås to Stend.

His son, Wollert Krohn, probably carried out a modernisation of the structures in the 1790s; many of the Louis XVI details in the buildings bear witness to this. It is in this style we can see the building in a prospectus by J.F.L.Dreyer from 1816. Most of the owners used Stend as a summer residence, a distinguished Bergen “leisure farm”. When Søndre Bergenhus County bought the property in 1861, an agricultural college was established in the grounds of the old noble estate.

In 1922 the main building was rebuilt and restored, and an extensive restoration work has also been implemented in the 1980s. The so-called knight’s hall in the middle wing is the most magnificent room in the house, with details in the mouldings, ceiling beams and wall panelling that dates it to the baroque period at the end of the 1600s, in the time of Hans Hiorth’s time as state official. The large painted wallpapers are from the 1700s. Today the main building at Stend is protected as a cultural monument.