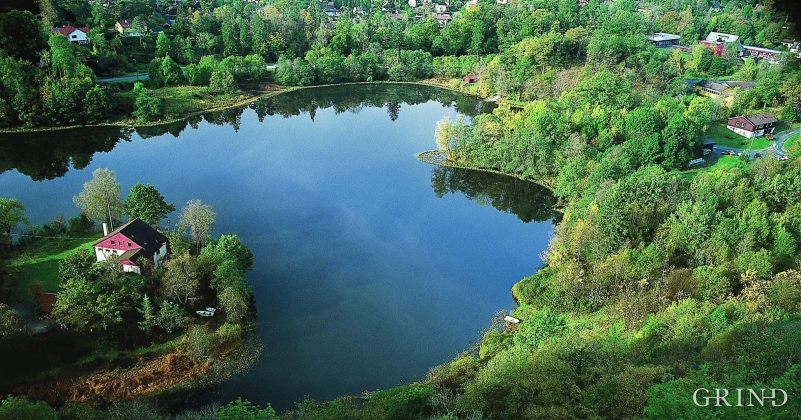 Myravatnet, Eikelund school up to the right. There are many trails in the area, including from the school. (Svein Nord)

In Sanddalen and Helldalsåsen the building of houses has increased dramatically. Where there eariery was grazing land, hundreds of families now live. Not far away, lies Rambjøra as an oasis in the built up area.

Take the children on an exciting discovery tour in the forest, or seek out the old hay fields along the forest edge. Rambjøra offers a large diversity inside a little area: black alder swamps, old oak trees and flower meadows.

Surrounded by lush swamp vegetation, one finds Myravatnet. Here, there are good growth conditions for plants, and several large swamp plants are common around the whole lake. A bit out in the water, beaked sedge and water horsetail create a more or less clear zone. Bog bean, with its beautiful white flowers, appears already in May. Eared willow also flowers then, a three-metre high bush that is most common on the eastern side of the water. American water plantain, giant bur reed and elongated sedge are somewhat rare swamp plants in Norway, but they grow both in Myravatnet and in other lakes in Fana. The lake otherwise has a varied supply of northern pike, leeches and the endangered crustacean waterlouse, that is found in only a few places in all of western Norway.

On the slope above the lake there is a dense deciduous forest, extending all the way up to the steep rocky ledge. Elm, ash and hazel are characteristic tree types, but also sycamore maple is found in reasonable amounts. As in many other areas around Bergen and in the county generally, sycamore maple has spread to the forest from trees planted on private properties, and it is becoming steadily more common. This introduced tree species thrives so well that it may outcompete the native tree types.

Black alder is perhaps the most usual tree species in Rambjøra. It tolerates much moisture and grows on the edge of Lake Myravatnet and over large areas of the hill in the eastern part of the preserved area. Black alder has become more common after the activities of hay-making and grazing have decreased. An arial photo from the 1950s shows that the area at that time had only a few scattered trees. That some of the hayfields on the south side toward Tveiterås are once again cut, gives hope that some of the beautiful flowering meadows might survive.

"Wet and cold, and anglerfish everywhere", is the refrain of a subtly ironic Bergen song. Replace anglerfish with pike, and it fits better. Even if it didn't "inhabit Bergen originally", the immigrant has in any case come to stay. Unfortunately, many would say.

The northern pike is found naturally for example in Eastern Norway. It is incredibly fierce. Many a trout or duckling has ended its life as dinner for a grow- up pike. Some places, such as in Lake Myravatnet, the story ends with the total disappearance of the trout. The average size of the northern pike in this lake is under a half of a kilogramme, but there probably also are giants of more than 15 kilogrammes.

A number of lakes in Hordaland have been stocked with pike, moslyt in Bergen. Grimevatnet, Nestunvatnet and Birkelandsvatnet all have populations of grown pike. The species is also found at Gaupås, Stend and Kristianborg. Gjeddevatnet ("Pike lake") by Verden is, however, free of pike. It is a good- tasting fish, which certainly could be harvested to a greater degree. That there will be motivation to stock lakes in western Norway with pike is nonetheless doubtful. The idea is that pike will reduce the amount of other fish and thereby improve the competitive quality of the survivors. This strategy has seldom succeeded.

Iris with black alder in the background. (Bjørn Moe)