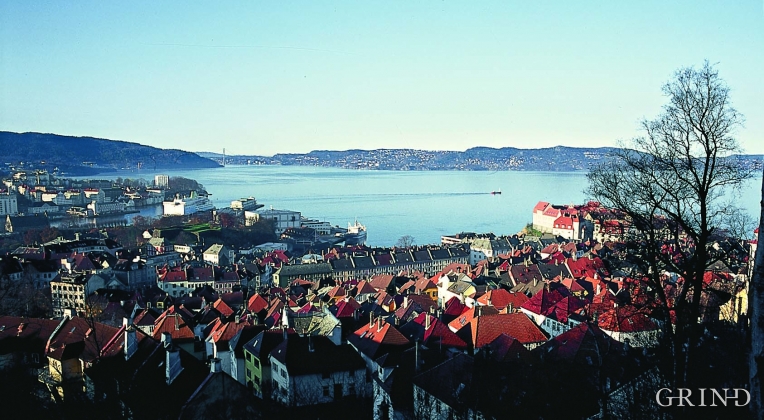 Swimming and fishing is fully possible in Byfjorden (By Fjord). The water is of good quality most places, after considerable resources have been used in past years for clean-up. But, past sins still lie in the mud on the sea bottom. Fish that live in direct contact with the bottom sludge should not be eaten.

By Fjord gets its runoff water from a steadily growing population in the Bergen area. During the last 20 years, therefore, the water quality and the bottom conditions have been analysed regularly. The large water masses in the whole fjord system, which in the main part of By Fjord are up to 360 metres deep, experience a complete turnover each year due to natural processes. The exchange is sufficient to maintain an acceptable level of water quality. Earlier, conditions have been critical in some of the limited bays and sounds, but many of the clean-up initiatives have helped. One of the most important was the laying of the main cloaca pipes from Store Lungegårdsvannet to Lyreneset east of Gravdal. After connecting this pipe in 1998, mechanically- rinsed runoff water drains out at 40 metres depth, ca. 100 metres from land.

Collecting and rinsing of large quantities of effluent cannot, however, hinder the considerable seepage of nutrient salts from human waste and agriculture, but this seepage is less than that which the coastal seawater brings in naturally. Neither has over-fertilizing led to unnaturally large growths of plankton and algae (known as “eutrofication”). The explanation for this is that the turnover of the upper water masses is good enough.

A greater concern is the heavy metals which are concentrated in the sludge deposits in the fjords in the Bergen area, and which can be taken up by fish. Larger concentrations of the environmental contaminant PCB than are allowed by law, have been documented in eel caught in the harbour area. As a consequence of this, occupational fishing of eel in By Fjord and the adjoining fjord areas was prohibited in 2000. The eel does not stay in the fjord system very long at one time, but it is extra vulnerable to the heavy metal pollution in the sludge deposits because it lives so near the sea bottom. It is also recommended to not eat the liver from fish caught in these same areas.

Map of the zones where occupational fishing is prohibited. (Bergen kommune/Eva Bjørseth)