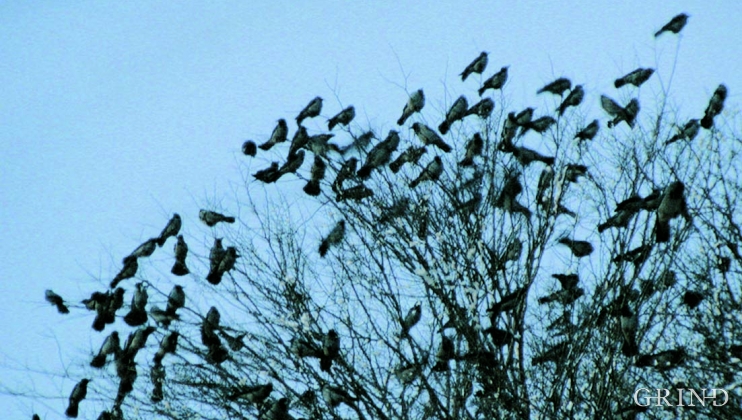 Møllendal graveyard is the winter home of the urban crows in Bergen. Those that do not want to stay overnight in the graveyard, perch in the lush deciduous trees at Fjellsiden.

As evening descends in wintertime, flocks of crows return home from their work, as they always have done. Their flying paths are rather fixed, from all parts of the city and from S. Askøy. In groves or on frozen water, they will usually touch down in order to gather in the dawdlers. Then, the whole flock descends upon the city, several thousand at last count, cackling and cawing as they land.

The fighting over the best night -perches is also quite a noisy affair. This perpetual spectacle does not make the crows a particularly popular neighbour. When the winter quarters were at Kolstien at Natland, it was said that the crows were partly responsible for the decline in property values in the area. A ways into the 1980s the city crows migrated away from Kolstein. Perhaps the crows thought that Kolstein was too far from the centre, or perhaps they got disturbed too often by angry neighbours? At the Møllendal graveyard they do not get disturbed, at least not by people. Also at Fjellsiden they are left relatively in peace.

Along with the centre's gulls and the waste-collection folk, the city crows are Bergen's most important cleaners. When the garbage dump lay open in Rådalen, this was a favourite gathering place for the crows in daytime. Here they found a stable supply of food - a good alternative to patrolling Fyllingsdalen hunting for an abandoned raisin bun or waiting for low tide by Straume to see if a stunned sea urchin might get washed onto land.

There are many more crows in Bergen in winter than in summer. After the nesting season, birds come from all around to work in the city for the winter. Over the years the numbers have been quite stable. Bergen folk should be glad for the crows. Without them, the city's night life would be much less lively, and the winter days more grey and littered with garbage.

The view of the crow's place in nature has changed. This poster was made for the Crow lottery in Bergen in 1950. (Bergens jæger- og fiskeriforenings årbok 1950)