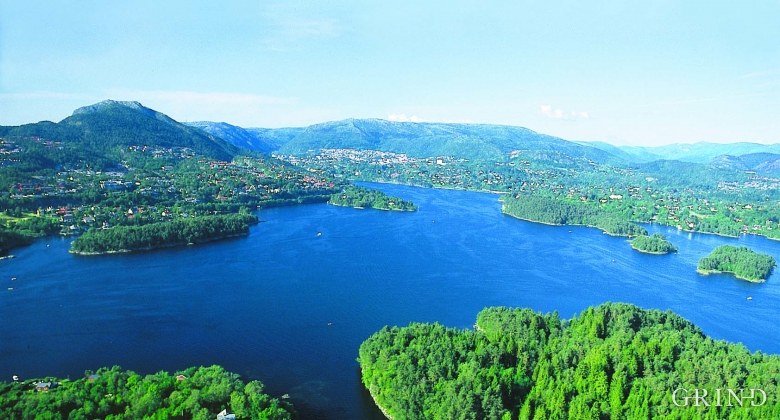 FROM RUNOFF WATER TO SWIMMING WATER

The Post-war Era came to Fana with its population growth and modern sanitary equipment. This had nearly catastrophic consequences for Nordåsvatnet as a recreational area. After the runoff water got re-directed to deeper water, and later also to the fjord outside, Lake Nordås won back both its swimming guests and its sports fishermen.

Lake Nordåsvatnet is connected with Grimstad Fjord through a quite narrow and shallow area by Straume. The smaller Sælevatnet has a connection with Lake Nordås through yet one more open, shallow canal. The narrow entry means that the tidewater in Lake Nordås is delayed by 110 minutes and the tidal difference is reduced to half (0.4 metres).

Two thresholds close the deeper water in, the one by Straume (now ca. 5 metres deep) and the other by Bønes (ca. 10 metres deep). Such still, enclosed deep water is called “stagnant”. The oxygen gets used up, and therefore hydrogen sulphide is formed. This is a natural process, and for Nordåsvatnet and Sælevatnet, we know that such conditions have existed for thousands of years. When the deep water comes to the surface, it smells rotten.

Early in the last Century the natural entrance to Straume was deepened from one to ca. five metres. This increased the water exchange between the ebb and flow tides significantly. The boundary to the rotten water then came down to ca. 10-15 metres inside of the Bønes threshold. But, an increase in human settelement and more cloaca, together with the use of artificial fertilizers, increased the supply of organic matter and industrial salts significantly. Rotten water was no longer limited to just the deep- and bottom water. Only a thin surface layer of a few metres could be said to be fresh. With a little wind, especially from the north, the surface layer would be shoved southwards, sometimes out over the whole basin. In Sælevatnet it was usual that the rotten water came up to the surface. The stink could sometimes be noticed over a wide area. Even worse, the vegetation and the animal life in the strand zone along the water would get poisoned and die.

In the 1960s the conditions got so troublesome that something had to be done. The municipal runoff water thereafter got laid in a closed pipe to ca. 40 metres depth. That the runoff water got led to such a great depth led also to a vertical mixing of the water masses, such that the circulation increased. After a time the limit of the rotten water stabilized at ca. 25 metres deep.

From 1980, the municipal runoff water in the district got led into a tunnel by Straume out to Knappen. After mechanical rinsing at Knappen the runoff-water was led by pipe to a greater depth at Grimstad Fjord. There is also a mechanical treatment plant at Flesland that receives runoff water through a tunnel from the Nesttun area. Taken as a whole, this has led to Nordåsvatnet being considerably less contaminated than earlier. Plankton growth and plant growth on beaches is now at an acceptable level.